Vigil held in Dublin for teens injured in violent attack

Locals lined both sides of the street at the Ballyfermot Civic Centre in support of Alanna Quinn Idris and her male friend, who were both viciously assaulted in the area last week. 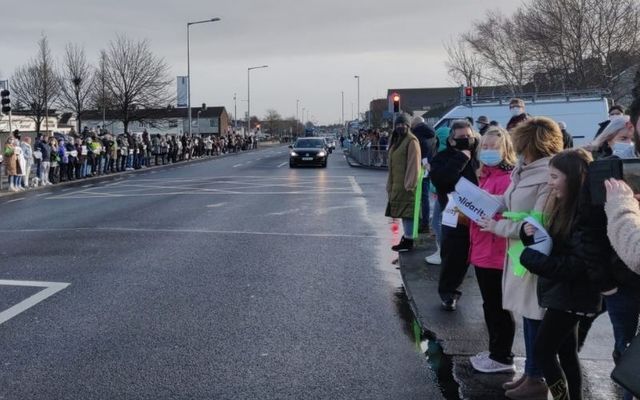 Hundreds of Dubliners attended a vigil on Saturday morning to show support for teenager Alanna Quinn Idris, who suffered a ruptured eyeball during a vicious assault in Ballyfermot last week.

Locals lined both sides of the street at the Ballyfermot Civic Centre just after 11 a.m. on Saturday, wearing green ribbons on their arms and carrying placards with slogans such as "solidarity" and "support the families".

The vigil was organized to support Alanna Quinn Idris and her male friend, who suffered stab wounds on his arm during last week's attack.

Alanna was hospitalized for several days following the attack, suffering a ruptured eyeball and fractures to her cheek and eye socket.

She also lost several teeth, while doctors informed her that there is a 90% chance that she will lose sight in her eye, which may have to be removed.

The assault sparked nationwide outrage whilst also prompting a wave of public sympathy and support for the families of the two victims.

Saturday morning's vigil was an attempt to bring the Ballyfermot community together and show solidarity with the families in the wake of the assault, according to local representatives and activists who attended the event.

Lydia Marshall, a local youth justice worker, told the Irish Examiner that the event highlighted that violence is not acceptable regardless of gender or age.

"Ballyfermot is a really good community. Showing up with no political banners, or anything like that, everyone’s leaving all that behind and we’re just showing up as human beings and standing in solidarity after the incident that happened last week," Marshall told the Irish Examiner.

Bríd Smith, a TD with Solidarity-People Before Profit, attended the vigil and said that it was important to show solidarity with the families from "the bottom up".

"It is important that everybody feels [that they’re] not alone. And that this is a good community, a positive community, it's very united. And, you know, the best foot forward from here on in".

Incredible show of solidarity here at today's vigil in Ballyfermot for Alanna Quinn Idris who had suffered horrific injuries & for her friend who tried to defend her. The community has been clear that such violence has no place here. We as reps must work together to support that. pic.twitter.com/BqkMfqSReg

Two men in their late teens have been charged over the assault after they were arrested on Thursday morning following local searches.

The men, who are both 18 years old, appeared in court on Friday morning in connection with the assault.

Alanna's mother revealed that her daughter had been harassed by a group of "tormentors" in Ballyfermot for several years before the attack took place, including verbal abuse and having eggs thrown at her.

Her family believes that last week's attack was a continuation of that abuse.