84,000 Ukrainians could opt to remain in Ireland even after the war in their own country ends, according to Irish government officials. 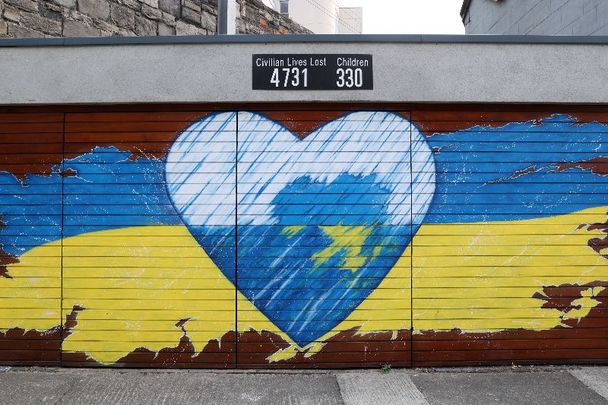 July 18, 2022: A Ukraine mural showing the number of civilian losses during the war so far in Dublin Near Google HQ. RollingNews.ie

Irish government officials believe 60 percent of Ukrainians that have come to Ireland will remain here after the war ends, officials said in a briefing document given to acting Justice Minister Simon Harris.

The document reads, “The likelihood of beneficiaries of temporary protection returning to Ukraine might be considered in the context of the Bosnian experience.

“There were 1.2 million recorded refugees from Bosnia and Herzegovina between 1992 and 1995. Forty percent repatriated between 1996 and 2005 while the remainder either stayed in their first host country or changed to a different country.

“While the legal basis under which temporary protection is being offered was a result of the Balkan experience, we should not assume that all Ukrainians will wish to immediately return home if and when the conflict ends.”

Harris was also briefed in the document from officials that this year will likely see immigration-related activity higher than 2022, which in some instances exceeded pre-Covid-19 levels.

Officials have also recommended reintroducing deportations which had been paused throughout the pandemic. The Justice Department is working with carriers to implement measures aimed at reducing the number of persons arriving with false documents.

Over the past year, a scheme to regularize long-term undocumented migrants and their eligible dependents where specific criteria are met was implemented.

The Harris document also highlights the importance and positive effect of inward migration for the Irish labor market considering there is a “population bubble” of those currently aged between 40 and 49 who will be retiring in 15-25 years.

Officials say the inward migration will “support the payment of future pensions.”

“There is a very real risk that we won't be able to accommodate everybody," O’Gorman said on RTÉ’s News At One on January 19.

On January 24, Ireland's Minister for Rural and Community Heather Humphreys and Minister of State Joe O’Brien set out the details of the €50 million Community Recognition Fund, which was designed "to specifically support communities across the country that have welcomed and are hosting families and citizens from Ukraine and other countries."

*A version of this column first appeared in the January 25 edition of the weekly Irish Voice newspaper, sister publication to IrishCentral.