Joe O'Brien, the new Minister of State for Integration, said the Department of Justice is exploring options to allow Ukrainians to remain in Ireland for five years, after which they could apply for citizenship. 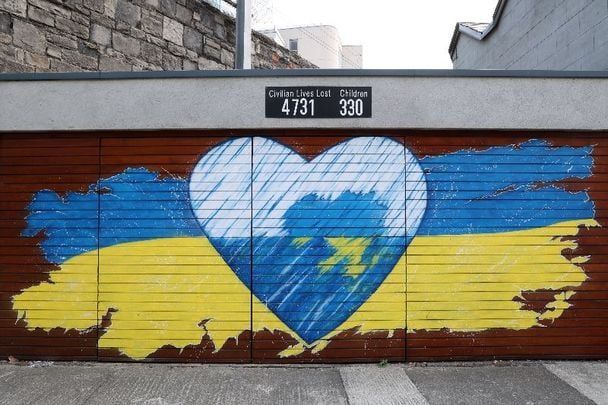 July 18, 2022: A Ukraine mural in Dublin showing the number of civilian losses during the war so far. Rolling News

An Irish Minister of State is calling for a pathway to citizenship for the tens of thousands of Ukrainian refugees who have fled to Ireland since the outbreak of Russia's war with Ukraine.

Joe O'Brien, the new Minister of State for Integration, said the Department of Justice is exploring options to allow Ukrainians to remain in Ireland for five years, after which they could apply for citizenship.

Ukrainian refugees are currently classed as beneficiaries of temporary protection, which entitles them to live, work, and claim benefits in the EU until the end of March 2024.

However, O'Brien believes that a "significant proportion" of Ukrainians will decide that "Ireland is a better place for them" and seek to remain in the country after their temporary protection status expires next year.

"If you have someone in the country with pretty much the full rights that Ukrainians have for two years plus, you will need to open a pathway for them to permanency," the Green Party TD told the Irish Times.

"My understanding is that [the Department of] Justice are beginning to look at status options for people in the long term."

O'Brien said a significant number of Ukrainian children will spend their formative years in Ireland and begin to see Ireland as home.

The Immigrant Council of Ireland has welcomed O'Brien's suggestion, stating that it will not be possible for some Ukrainian refugees to return home.

The Immigrant Council also said it would be a "huge challenge" to process every application to remain in Ireland after the temporary protection status comes to an end in March 2024, unless the Irish Government introduces a pathway to permanency beforehand.

"You’ll end up with 70,000 becoming undocumented in the short term if they don’t have a scheme in place, and that’s not desirable from anyone’s point of view," Immigrant Council chief executive Brian Killoran told the Irish Times.

O'Brien added that the Irish Government should plan for the same numbers of refugees from Ukraine and elsewhere in 2023 as arrived last year, adding that every county would have to accommodate modular building projects.

Modular homes are assembled off-site in a factory using the same methods and regulations as traditional houses but can be assembled in just four hours.

The Irish Government plans to build 700 modular homes to help house refugees as part of a pilot program, but O'Brien believes it will need to build a multiple of the 700 currently planned.

Ireland is currently providing accommodation for 71,255 refugees, including 51,955 from Ukraine and over 19,300 international protection applicants from other countries.

O'Brien said the Government needs to acquire a lot of property to accommodate refugees and reduce its reliance on the private sector.