U2's Bono and The Pope met on Wednesday to discuss global charity and the sexual abuse crisis in the Church in Ireland. 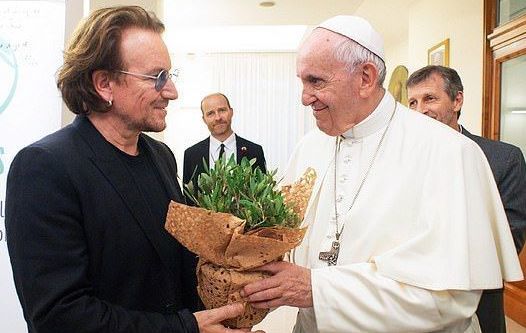 Bono met with The Pope on Wednesday AFP / Getty

Bono has told Pope Francis that he feels the perception currently of the Catholic Church is that abusers “are being more protected than the victims”.

The Irish Times reports that U2 frontman Bono was at The Vatican this week to sign an agreement between his charity ONE and the Scholas Occurentes educational charity, which was formed in Bueno Aires, Argentina when Francis was in charge there.

The partnership between ONE and Scholas Occurentes is working to educate “130 million girls around the world do not go to school because they are girls.”

Following his meeting with the pontiff, Bono said of Pope Francis “Honestly, he is quite a radical thinker and I felt quite old-fashioned sitting next to him.”

The two also reportedly discussed the crisis in Ireland surrounding the sexual abuse epidemic in the Catholic Church.

“Having just come from Ireland, inevitably, we talked about his [being] aghast about what has happened in the Church,” Bono told reporters after the meeting.

“You could see the pain in his face,” added Bono.

“I explained to him how it looks to some people that the abusers are being more protected than the victims and you could see the pain in his face,” said Bono.

A spokesman for Bono said the Irish rocker believes Pope Francis “is the leader to put this right and change people’s perceptions that the church is doing more to protect the abusers rather than the victims.”

What do you make of the meeting between Bono and The Pope? Share in the comments