A man from County Tyrone has run a marathon in his driveway in a bid to raise money for the NHS and for those fighting coronavirus. 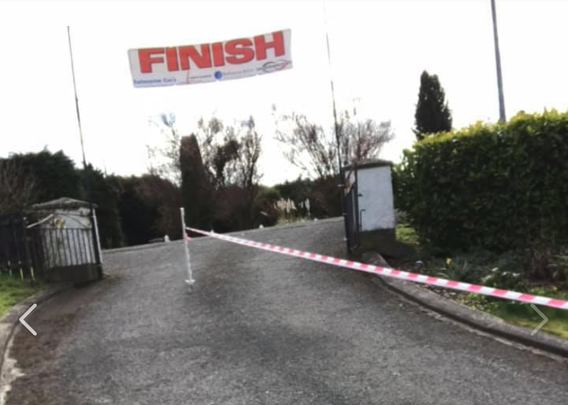 Keith Clarke from Dungannon, County Tyrone ran a marathon in his driveway to raise money for first responders. Facebook / Decagarage.

A man from County Tyrone has run a marathon in his driveway in a bid to raise money for the NHS and for those fighting coronavirus.

Keith Clarke from Dungannon described the feat as "run the drive to stay alive" and completed the task on Monday.

Not only did he complete it, but he pushed a wheelbarrow as he went.

Clarke ended up circling his driveway a staggering 416 times, which took him five-and-a-half hours.

He also raised a total of over £2,000, all of which will be donated to the Intensive Care Society in its fight against Covid-19.

And last but not least, a Co Tyrone man has run a marathon in his driveway while pushing a wheelbarrow to raise money for the NHS.

Keith Clarke from Dungannon described the feat as “run the drive to stay alive” as he started running on Monday morning pic.twitter.com/GqHsKeAYS5

The Northern Irishman, who works as a personal trainer, told PA news agency, "I saw a few people on social media doing a few runs in their garden and I know we’re not allowed out of our homes so I thought, I’ve a bit of a driveway here and I’ve done a few challenges, so I thought now is a good time as any.

"I’ll hopefully inspire a few people to go and do some running themselves.

Remarkably, this isn't the first time Clarke had completed a marathon while pushing a wheelbarrow, and he even ran the Dublin Marathon backward a few years ago.

"I’m very pleased about that," he added.

"I just can’t believe how much I have raised and how people have been donating. I know it’s hard times at the moment, especially people off work.

"I’m chuffed to bits and the wheelbarrow added a bit of craic to it.

"It shows you don’t have to go far to raise money. You just have to get your head right, that’s all you need to do. You will quickly clock up a few miles."

To donate to Keith's visit www.justgiving.com/fundraising/keith-clarke8.

Read more: Love in a time of covid-19 - Irish couple tie the knot in empty church