A moving truck was overturned in Galway as Storm Jorge continues to batter the west of Ireland. 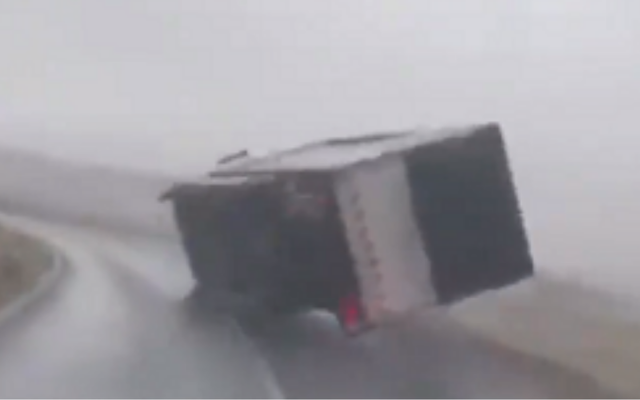 The truck was overturned near Connemara Ireland's Underworld Twitter

A moving truck was overturned on the N59 in Galway as Storm Jorge continues to batter the west coast of Ireland.

The incident occurred near Maam Cross in Connemara, while over 30 roads have been closed in the county due to flooding.

Gardaí said that no one was injured in the incident, which is said to have occurred at around 1 p.m.

Strong winds from #StormJorge blowing a truck over today on the N59 near Maam cross
Mace Head has recorded gust of 133kmh. The storm is now moving quickly across the country. pic.twitter.com/yOcmPzpZzL

A status red warning is the highest alert that can be issued by Met Éireann and warns people in affected areas to protect themselves from dangerous weather conditions.

The weather agency is encouraging people to stay indoors where possible.

Anna Rabbitte, a Fianna Fáil TD for Galway East, said that South Galway was "submerged" and that further road closures were inevitable.

She said that most of the roads in the region are already impassable and that 32 roads were closed on Saturday morning.

Strong winds also lashed the west coast with gusts of over 80 miles per hour hitting Galway near Connemara.

Galway City Council said that it expects even stronger gusts, close to 100 miles per hour, on Saturday afternoon.

Average wind speeds in Galway and Clare have been over 60 miles per hour and the Irish Coast Guard has warned people to stay away from cliffs, piers, beaches or any other exposed coastal areas.

A Gaelic football match between Kerry and Mayo which was due to take place in Kerry on Saturday evening fell victim to Storm Jorge and was postponed until Sunday afternoon.

Bus Eireann has also canceled services in Clare and Galway between 11 a.m. and 5 p.m. on Saturday afternoon.

The worst of Storm Jorge is expected to be over by 3 p.m. on Saturday.

Storm Jorge is the latest in a series of storms to batter Ireland after Ciara and Dennis recently caused widespread disruption in what has been one of the wettest Februarys on record.