Trinity College Dublin is set to formally review the name of its Berkeley Library and the future of human remains stolen from Inishbofin, Co Galway. 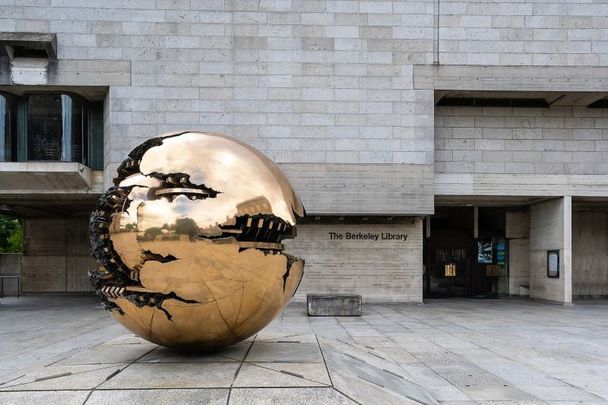 The Trinity Legacies Review Working Group is set to address two key historical legacy issues - the name of its Berkeley Library, named after an Irish-born slave owner, and the future of human remains stored at Trinity that were stolen from Inishbofin, Co Galway.

The Trinity Legacies Review Working Group, composed of representatives of Trinity’s student body, unions, and academics, met for the first time last week to consider evidence-based submissions from the university community and the wider public on the two key issues.

The working group will provide options for consideration to the relevant decision-making authority in Trinity.

It comes as universities and other institutions around the world investigate their historical legacies and consider how to address them.

Trinity says that academic research is underpinning its approach to legacy matters. The Trinity Colonial Legacies Project, established in 2021, has been examining and reflecting on Trinity’s colonial legacies through research and engagement with public audiences. Slavery, statues, curriculum development, museum, and library collections are all included in this project. Its findings are helping to inform the current review process.

Work on both matters is already well advanced, Trinity said. Earlier in November, Trinity academics attended a public consultation in Inishbofin to discuss the process with the island community. The Trinity Legacies Review Working Group is now inviting evidence-based submissions from the public on both issues.

More information on how to make submissions on these issues is here.

It is expected that the Trinity Board will be updated on the complex issues surrounding the Inishbofin human remains before Christmas, while the questions about the Berkeley Library name will come to the Board early in the New Year. Decisions will be made public as soon as they are reached.

Trinity’s Provost, Dr. Linda Doyle said: “I am glad to see that this process is underway. The goal is to shed light, not heat, on these complex legacy issues. Key to this process are the evidence-based submissions, which are an important part of broadening our understanding of all the dimensions of these matters.

“It is also a learning process for all of us and, if necessary, we will evolve the process as we learn.”

The human remains that were removed from Inishbofin in 1890 for research purposes and without the islanders’ consent are associated with former Trinity-affiliated Professors Alfred C. Haddon and Andrew F. Dixon and are currently stored securely in Trinity’s Old Anatomy Museum.

As Trinity notes, it is clear from Haddon’s own account that these remains were acquired without the permission of the islanders:

"We two climbed over the gate, went down the enclosure which is practically a large graveyard, disturbing some cattle, stumbled along and entered the church, tumbling over the grave stones.

"In the corner we saw by the dim light the skulls in a recess in the wall. There must have been 40 or more, all broken, mostly useless, but we found a dozen which were worth carrying away, only one however having the face bones.

"Whilst we were thus engaged we heard 2 men slowly walking along the road and like Brer Fox we lay low and like the Tar Baby, 'kept on saying nothing'.

"When the coast was clear we put our spoils in the sack and cautiously made our wat back to the road. Then it did not matter who saw us. The sailors wanted to take the sack when we got back to the boat but Dixon would not give it up and when asked what was in it said 'Potheen'. So without any further trouble we got the skulls aboard and then we packed them in Dixon's portmanteau and locked it and no except our two selves had an idea that there are a dozen human skulls on board and they shan't know either."

Trinity’s Old Anatomy Museum, which is used for research and teaching purposes, contains human remains from all over the world collected by Trinity researchers, mostly in the late 19th century, when the practice was commonplace.

An evidence document on this issue compiled by Trinity academics can be viewed here. Next-stage submissions on this sensitive issue are invited on or before Wednesday, December 7, 2022.

Trinity’s main library was named in 1978 after the philosopher George Berkeley, whose history as a slave owner has since been well documented. Trinity is seeking written submissions on the name of the Berkeley Library, following a de-naming petition from students.

According to Trinity, George Berkeley (1686-1753) was a renowned Irish philosopher after whom both the college and the city of Berkeley, California are named, as well as a residential college at Yale University.

A former fellow at Trinity College Dublin and Dean of Derry in the Church of Ireland, Berkeley acquired at least four slaves on his Rhode Island estate in 1730-31. Berkeley had bought a 96-acre plantation there while planning a colonial university in Bermuda; the scheme failed and he donated his plantation and portions of his library to Yale College and a selection from his library to Harvard College.

A working document by Trinity historians can be viewed here. In this case, next-stage submissions are invited by Tuesday, January 31, 2023.