Damian Browne and Fergus Farrell will attempt to break a longstanding world record in 2022. 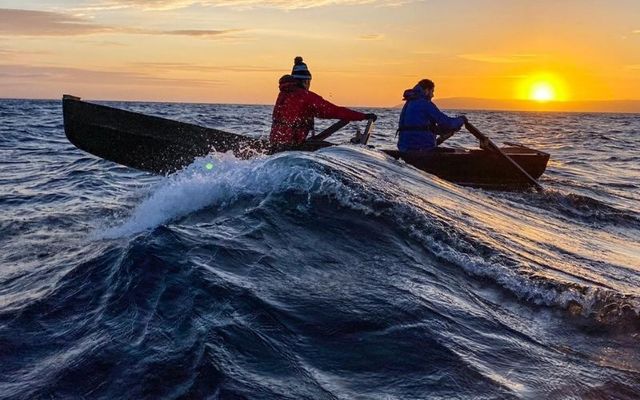 Two extreme adventurers from County Galway plan to set a new Guinness World Record by rowing almost 5,000 kilometers across the Atlantic Ocean in 2022.

Damian Browne, a former professional rugby player, and his friend Fergus Farrell will row across 4,937km of treacherous sea conditions in a traditional Irish currach in an attempt to break a 124-year-old world record.

The duo, both of Traditional Currach Baycrossing, launched "Project Empower" on Sept. 29 by sailing from Inish Oirr in the Aran Islands to Galway City since that voyage will be the last leg of their transatlantic crossing in two years.

The launch was also a nod to Ireland's seafaring tradition as the route was often used by travelers journeying between the Aran Islands and the Irish coast.

The 26-mile arduous journey took the sailers eight hours and 45 minutes to complete.

Browne and Farrell will undertake an unsupported row from America to Galway City in an attempt to trump George Harboe and Frank Samuelsen, who successfully rowed from New York to Sicily in 1896.

The duo took 55 days and 13 hours to cross the Atlantic in the daring voyage, and their record has yet to be beaten in 124 years after 11 different duos failed to better it, with only six completing the crossing.

in total, 52 pairs of rowers have attempted to row unsupported across the Atlantic Ocean and only 18 have made land in Europe.

Browne and Farrell will be rowing in an ocean rowing boat built by Justin Adkin of Seasabre. Adkin previously teamed up with Browne to build a boat for Browne's daring solo Atlantic crossing in 2017.

Browne, who has raised more than €100,000 for Irish and African-based charities through his extreme adventuring, and has summited five of the highest peaks on each continent.

Crowdfunding options for Project Empower will open on Oct. 6 and you can find out more information on the project's official website in the meantime.