Nothing was going to stop Irish sailor Garry Crothers from returning to Derry for his daughter's wedding after he became stuck in Sint Maarten due to coronavirus. 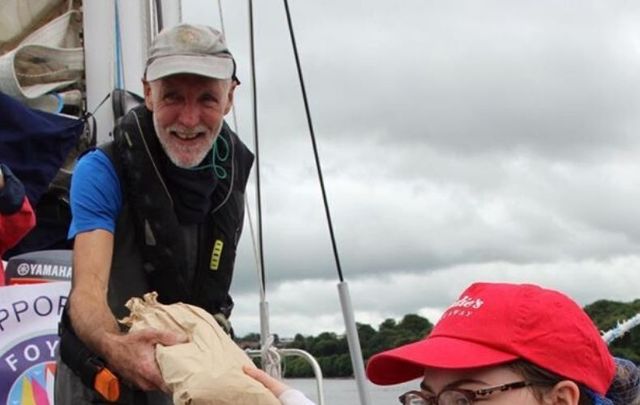 Garry Crothers was greeted with a portion of fish and chips on his arrival in Derry. Foyle Sailability, Facebook

Garry Crothers, a one-armed Irish sailor, has completed a remarkable 4,000-mile transatlantic solo voyage to be with his daughter on her wedding day.

Garry Crothers, 64, had just moored his yacht on the Caribbean island of Sint Maarten when the COVID-19 pandemic broke out, grounding flights the world over and threatening his plans to return home to Ireland.

Concerned about the risk of potentially missing his daughter Oonagh's wedding in September, Crothers set about planning his transatlantic voyage back to Derry.

Though he normally journeys on his yacht - the Kind of Blue - with a two-person crew, Crothers was forced to make the grueling 37-day voyage on his own due to a lack of available crew members.

Read more: Irishman who sailed to America with Christopher Columbus

Even more impressive, Crothers' managed his solo journey with just one arm. Two years ago, his arm was amputated due to persisting complications stemming from a motorcycle accident in 2008. After his amputation, Crothers became involved with Foyle Sailability in Northern Ireland, a cross-border voluntary organization that delivers sailing opportunities for people with disabilities.

In a public Facebook post in May, Crothers wrote: "The physical trauma of my injuries were obviously quite severe, but the hidden mental difficulties were equally as difficult to overcome. My involvement with Sailability helped me to realise that my life was not over just because I'd lost an arm. I came into contact with a wonderful bunch of people, and now I'm honoured to serve as their Vice Chairman."

Despite being concerned that the final stretch of his journey would be scuppered by storms that would force him to land in Spain or Kinsale in Co Cork, Crothers safely landed into Lough Foyle to a hero's reception on Sunday evening.

The ambitious sailor was greeted with an order of fish and chips from local chipper Bridie's, a fresh pint of Guinness, and a huge crowd welcoming him back home:

Great turnout yesterday for Garry in Donegal. First sighting was on Friday night at Malin head. A group travelled down...

In a Facebook post, the mayor of Derry City and Strabane said "Garry's story is one of great determination, persistence and passion - an inspiration to us all"

My thanks to Deputy Mayor Alderman Graham Warke who was along the Quay today to welcome Garry Crothers home after his...