Former cardinal Theodore McCarrick, 91, has been charged with three counts of indecent assault and battery on a person over 14 relating to an alleged incident in 1974. 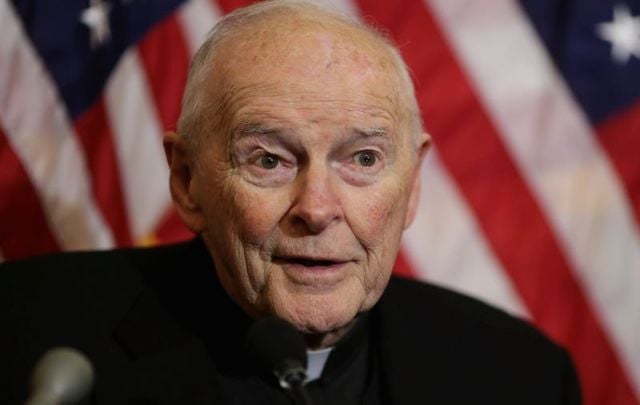 December 8, 2015: Cardinal Theodore McCarrick, archbishop emeritus of Washington, speaks during a news conference with senators and national religious leaders to respond to attempts at vilifying refugees and to call on lawmakers to engage in policymaking and not 'fear-mongering' at the U.S. Capitol in Washington, DC. Getty Images

Theodore McCarrick, who was defrocked in 2019 after the Vatican found him guilty of sex crimes, has been charged today, July 29, with new sexual assault charges.

McCarrick, now 91 years old, has been charged with three counts of indecent assault and battery on a person over 14, according to The Boston Globe, who was the first to report on the new charges.

The alleged victim, whose name has not been published, claims that McCarrick, a friend of his family, molested him in his youth.

The Boston Globe reports: “On June 8, 1974, the alleged victim, then 16, said he was at his brother’s wedding reception at Wellesley College when McCarrick told him his father wanted the two of them to 'have a talk' because the teenager was being mischievous at home and not attending church, according to the report.

"He said McCarrick groped his genitals when they were walking around the campus.

“When they returned to the reception, McCarrick led him into a small room, closed the blinds, and told him 'that he needed to go to confession.' He then fondled his genitals while 'saying prayers to make me feel holy,' according to the report.

“Before leaving the room, McCarrick told him to 'say three our fathers and a Hail Mary or it was one our father and three Hail Marys, so God can redeem you of your sins,' the report states.

“The man told police that when he returned to the reception, his father asked him how his talk with McCarrick went. He told him to listen to the priest and 'do what he tells you, he’s really going to help you.'"

At the time of the newly-alleged incident, McCarrick was a monsignor and secretary to Cardinal Terence Cooke and lived in the rectory attached to St. Patrick’s Cathedral in New York City.

He was removed from public ministry in 2018 amid “credible” sexual abuse allegations. The following year, he was laicized.

The new criminal complaint was filed on July 29 by Wellesley Police in Dedham District Court in Massachusetts. McCarrick, who now lives in Missouri, has been ordered to appear in court for arraignment on August 26.

The investigation was launched in January after the alleged victim's attorney, Mitchell Garabedian, wrote a letter to the Norfolk and Middlesex district attorneys alleging sexual abuse by McCarrick.

Garabedian, who has previously undertaken similar abuse lawsuits, said: “My client is showing an enormous amount of courage by being a complainant in the criminal process.

“This is the first cardinal in the United States ever charged criminally for a sexual offense against a minor.”

He added: “It takes an enormous amount of courage for a sexual abuse victim to report having been sexually abused to investigators and proceed through the criminal process.

“Let the facts be presented, the law applied, and a fair verdict rendered.”

Anne Barrett Doyle, the co-founder of the online research database BishopAccountability.org, told the Associated Press on Thursday that “for McCarrick, today’s reckoning is long overdue.”

“We hope that these charges lead to justice,” she added.

McCarrick’s attorney, Barry Coburn of Washington D.C., said that “we will look forward to addressing this issue in the courtroom.”