The Northern Lights, aka Aurora Borealis, are likely to be visible in Northern Ireland, Scotland, and northern England on March 31, the British Geological Survey (BGS) said. 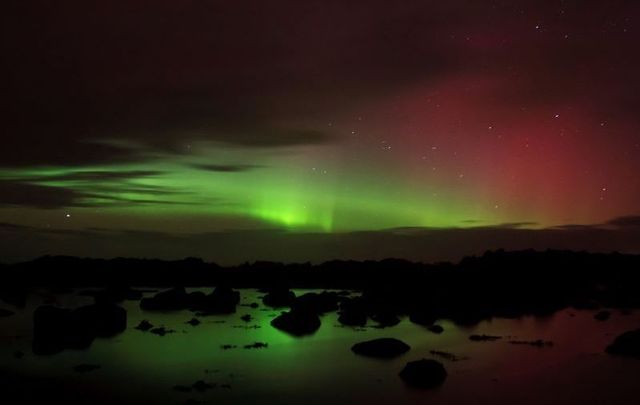 The Northern Lights may be visible across Northern Ireland on Thursday night and Friday, according to the British Geological Survey.

The natural phenomenon is likely to be visible in Northern Ireland, Scotland, and northern England, the British Geological Survey (BGS) said.

The UK Government agency said it was easier to see the Northern Lights than people realize but added that visibility is reliant on clear dark skies.

"Assuming clear dark skies, there is an increased chance of seeing the aurora on 31st March and April 1st," the BGS said on Twitter.

The Coronal Mass Ejections (CMEs) observed on the 28th March arrived on 31st March and caused disturbances in the Earth’s magnetic environment, known as a geomagnetic storm. Another CME has also been observed leaving the Sun on 30th March, which is expected to arrive 2nd April. pic.twitter.com/8HrL0XI6GO

The UK Met Office said on Thursday that there is a chance of aurora sightings over Northern Ireland tonight:

The CME arrival last night brought minor geomagnetic storms. With enhanced geomagnetic conditions, there is the chance for further aurora sightings across Scotland and Northern Ireland tonight, and possibly across the north of England if strong geomagnetic activity occurs pic.twitter.com/VkIUzG3ZqC

Donegal Weather Channel shared this stunning snap of the Northern Lights shimmering over Donegal in  the early hours of Thursday:

The northern lights this morning from Donegal after the CME arrived and hit earth. This fabulous image was captured by Noel Keating Photography

Predominately seen in high-latitude regions in the Arctic, Aurora Borealis is caused when large explosions take place on the surface of the sun.

These explosions send huge amounts of charged particles into space, which are drawn to the magnetic fields in the Arctic and Antarctic.

The charged particles collide with gas molecules in Earth's atmosphere, causing the energy to be released in a brilliant display of bright colors.

The phenomenon will be visible in Northern Ireland and Great Britain because "geomagnetic conditions and solar wind parameters are currently at elevated levels", the BGS said on Twitter.

However, Sarah Kent, a meteorologist with the UK's Met Office, said it would still require a significant degree of luck to see the Northern Lights in Northern Ireland.

"If people are feeling lucky, they should go out and wrap themselves up. Tonight we are still looking at a mixture of showers and clear spells," Kent told the Belfast Telegraph.

Kent said the clearest skies will be in the south of Northern Ireland between 10 and 11 pm on Thursday.

"I’m sure there will be some stunning photos but people will really need to be lucky," she said.