The graffiti threatened to hang the Tanáiste if he "set foot in Ulster". 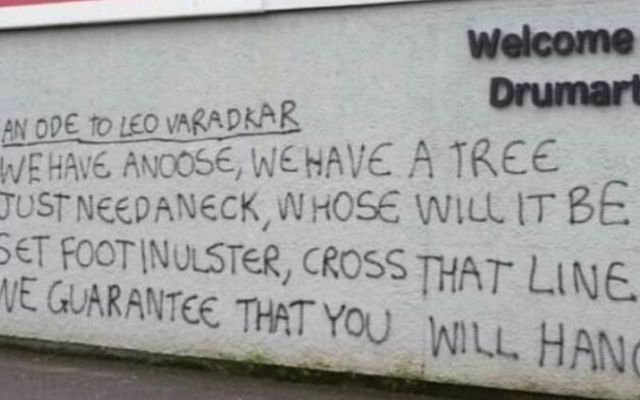 Police in Northern Ireland are investigating threatening graffiti that promised to hang Leo Varadkar if he "set foot in Ulster".

The messaged appeared on a wall in Belfast's Drumart Square sometime between Friday evening and Saturday morning and the Police Service of Northern Ireland (PSNI) is treating the incident as a hate crime.

"Police are treating a report of criminal damage at Drumart Square in Belvoir Estate as a hate crime," the PSNI said in a statement on Saturday.

Northern Irish politicians have condemned the incident, with First Minister Arlene Foster and Deputy First Minister Michelle O'Neill both speaking out against the threatening message.

"Violence or the threat of violence has no place in democracy. I condemn those behind this," Foster tweeted on Saturday.

Violence or the threat of violence has no place in democracy. I condemn those behind this. The NI Protocol needs replaced but violence or its threat will not achieve the change Northern Ireland needs. https://t.co/7cmlSJ0Yg7

Meanwhile, Sinn Féin Vice President Michelle O'Neill said that she was "shocked" by the "disgusting" graffiti and said that the majority of people in Northern Ireland would condemn the message.

"This is a hate crime motivated by prejudice. It’s also criminal damage and anyone with information should contact police who must investigate," O'Neill said on Twitter.

"Threats and intimidation driven by sectarianism and racism must be faced down by all of us. Together."

Vile, shameful attack on @LeoVaradkar. Threats and intimidation driven by sectarianism and racism must be faced down by all of us. Together. pic.twitter.com/CTfzopPXrC

The PSNI is urging anyone with anyone in relation to the incident to contact officers at Lisburn Road.