13-year-old hero Geraldine Maughan will have to spend months in the hospital after she bravely protected her 11-month-old nephew from a savage machete attack in Co Fermanagh. 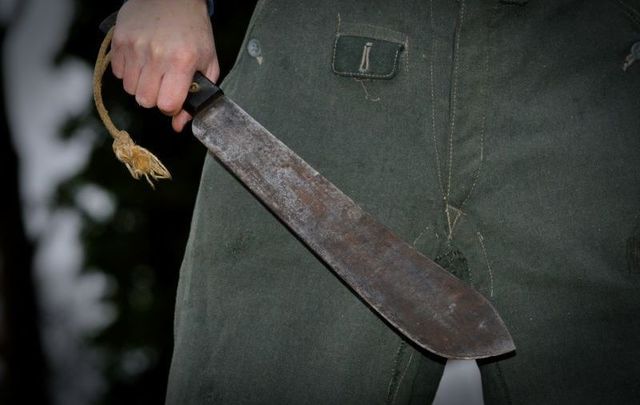 13-year-old Geraldine Maughan will be hospitalized for months after a savage machete attack in Co Fermanagh. Getty Images

Geraldine Maughan, 13, is being hailed a hero after shielding her 11-month-old nephew during a brutal attack in the family's Co Fermanagh home

Irish teenager Geraldine Maughan could be in the hospital for months after she bravely protected her 11-month-old nephew John during a savage machete attack in her family’s Co Fermanagh home this past weekend.

Speaking with The Irish Mirror, Geraldine’s sister Pauline, who is the mother of baby John, said Geraldine's "lung collapsed right away" and that Geraldine needed about 300 stitches.

"The way she has been cut means she can’t walk now and has to learn to walk again. She’ll be in hospital for weeks. Her back won’t be the same for about 12 months."

Pauline added: “She’s very frightened from what happened. She was just sitting there and they just walked in and two of them started hitting at her.

“It’s disgraceful, grown men doing that to a girl and baby.”

The Irish Sun reports that in a video that circulated on social media, Gramsey’s son Christopher Patrick Joyce, father to the 11-month-old that Geraldine shielded, called out the criminals: “You knew the men weren’t here — you watched the men go off.

“You came in atop of that little girl. She was holding my little John in her arms, 11 months old, and you try to hit my little child with the machete, whoever it was.

“She saved my little child. And look what you done — are you proud of that.”

“I hope you’re proud of what you did to the girl, a little child.”

RTÉ reported on Tuesday that Geraldine is in "ill but stable condition" and that the family believes they know who their attackers are and that they're "from the Republic."

On Monday, Lizzy and Pauline discussed the attack with BBC Newsline:

A 13-year-old girl is recovering in hospital after being attacked by a gang armed with machetes at a house in Lisnaskea. Her family say she was protecting her 11-month-old nephew when she was wounded. It's understood the teenager needed 300 stitches and suffered a collapsed lung. She was critically ill, but is now said to be 'ill but in a stable condition'. The police have started an attempted murder inquiry. Our South west reporter Julian Fowler has been to the scene.