A teenage aunt has been hailed as a hero after she came between a machete-welding intruder and her baby nephew during a home invasion. 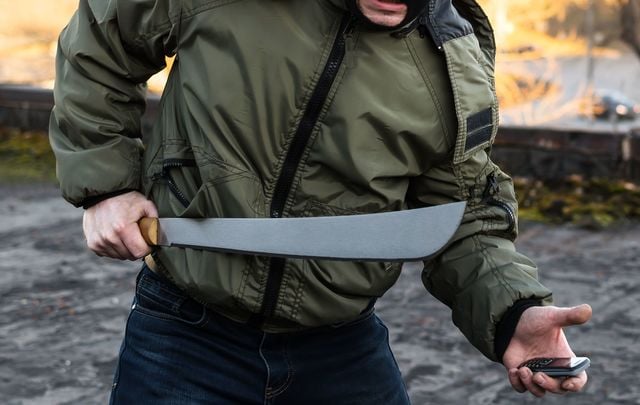 A teenage aunt has been hailed as a hero after she came between a machete-welding intruder and her baby nephew during a home invasion. The 13-year-old hero is in critical condition.

Speaking to BBC Radio Ulster, the baby's grandmother, Elizabeth Joyce, said the 11-month-old boy is unharmed "because his auntie is a hero". The children were in their Fermanagh home with their grandmother when a number of men broke into the house.

She said, "She’s 13 years old and she threw her whole self over that baby and she saved his life.”

The proud and relieved grandmother told ITV news "They burst through the house - one attacker came to me, I was screaming and kicking and fighting back."

The Police Service of Northern Ireland (PSNI) said men armed with machetes broke into the house, on Trasna Way, in Lisnaskea, in County Fermanagh, just after 9.15pm on Saturday.

Joyce continued “The other attacker went for this wee fella, but his auntie - who is in hospital in a critical condition - she threw herself on top of the baby to save the baby’s life.”

She added: “What kind of a man would go and do that to a 13-year-old girl? Leave her fighting for her life? She’s a hero.

“The ones who did it should be brought to justice and they should be done for attempted murder because they came to my home to kill.”

Joyce fought off the attackers and chased them out of the family home. The 13-year-old was left with a stab wound on her back.

The grandmother said "I thought she was going to die on my chair.

“They tried to kill us in our own home.”

The hero teenager is now in a critical but stable condition in the hospital.  Joyce was also treated for a stab wound to her leg and has been discharged.

Police investigating the attack are treating it as attempted murder.

Detective Sergeant Keith Monaghan told the Irish Times it “must have been a terrifying ordeal for those involved” and that the force was determined to find the men responsible.

“We have several lines of enquiry which we are progressing at this time but I would ask anyone with information or who noticed any suspicious activity in the area to contact detectives in Enniskillen and pass that information on."

Local Social Democratic and Labour Party Councillor, Garbhan McPhillips, said the community is shocked by the brutality of the home invasion.

He said, "I am angry that something like this could happen. For anybody to break into a house and stab anybody, never mind a 13-year-old girl, is horrific. I don’t what would be going through their heads that they would do something like that. It is unbelievable, to be honest.

McPhillips added “My thoughts are with the family and please God the girl makes a full recovery. It was an awful ordeal they went through.”

“This attack in Lisnaskea, carried out by men carrying machetes, is to be condemned in the strongest possible terms,” he said.

“This must have been a terrifying experience for [the two victims].”

Anyone with information about what happened is asked to contact police on 101, or anonymously via Crimestoppers on 0800 555 111.