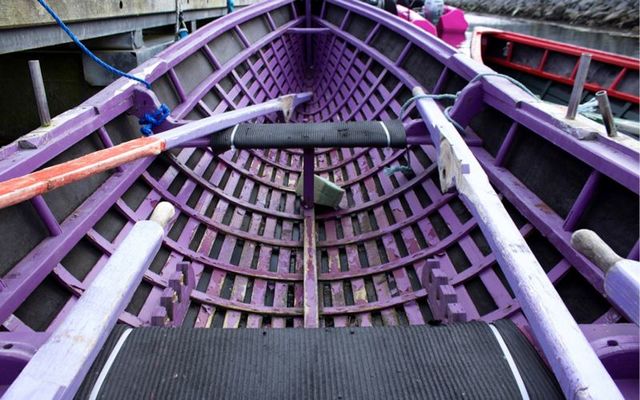 In the early hours of a summer morning, Niamh Scullion from Belfast, and her teammates, row their 12-seater currach past Islay Island, in Scotland’s Hebrides. They continue past Gigha, another island in the archipelago.

Close to Northern Ireland’s Rathlin, they find themselves off course in turbulent waters in the MacDonnell race. The MacDonnell brothers drowned there when on a similar journey.

Though scared, Niamh and her teammates trust the sturdy currach, but more important, they trust each other. This diverse Belfast group have found common ground in a currach.

Niamh grew up close to the River Bann in Ballyscullion, County Down, yet she had no experience on the water.

She was first introduced to boating when she worked on yachts in Florida, cleaning, and detailing them. She says she stayed on land. There wasn’t an opportunity to sail.

In 2009 Niamh returned to live in Belfast, where she got involved in currach-building.

As a lone parent she wanted to do something to impress her children and to show other people they could do it too. Niamh quickly became a skilled currach-builder. She soon taught workshops to children at Belfast’s Integrated Steiner School.

Currach-building has been a natural path to integration, she says. Niamh understands how to bring community together. In 2018 former prime minister, Theresa May, honoured her with a Points of Light Award.

She says, when a group forms organically, because of a shared interest, they unite and work together. She mentions, it is not unusual to find Catholics and Protestants rowing together at the Lagan Currach, a club where she’s a member.

Purposefully bringing Catholics and Protestants together in a peace-building effort has proven unsuccessful, she says. But when people meet naturally and build a boat, they develop a shared respect for the vessel and for each other.

During the process, people “form a bond.” And she says in their club’s case, if people haven’t built the boat, they help maintain it because it regularly needs cleaning, oiling, and retarring, so everyone plays a part. “It’s our boat.”

Collective ownership is key because it is uncomplicated, she says. People are less likely to fight over it because they don’t want to destroy the thing that is special. “When you think about it, there’s not much everyone owns collectively, without many layers of institutionalized management.”

Also, the currach brings a collective sense of pride and community. “That’s the culture of the group,” says Niamh. When she’s in the currach with her teammates, she’s reminded “how brilliant people are” in her community, she says.

With currach-building and peacebuilding. “It’s not just about Catholic and Protestants. It’s about everybody in Northern Ireland, which is a diverse population. Everyone has to get involved.”

She mentions that Lagan Currach Club’s membership includes diverse peoples from many countries, including, Syria, Brazil, Peru, Cuba, and Spain.

She adds the complications of life on land in Northern Ireland are forgotten when the rowers are on the water. The group often rows on Belfast’s River Lagan. “It’s a kind of forgotten space. Nobody is watching you. It’s an escape from any oppressive day-to-day structures,” says Niamh.

It's a place too where they get a sense of all the elements of the city as they journey from the city centre, past tower blocks, to industrial areas, to residential neighbourhoods, then to somewhat wild areas.

Being on the Lagan River, says Niamh, “feels good.” “The sound of the oars sweeping through the water, the smell of the seed oil and oak, and at times seeing the starling murmuration at Albert Bridge, makes the journey special.”

Because of the time spent together rowing and currach-building, the group have formed a special relationship. And she says, adventures have deepened the friendships.

Some of those adventures have included a trip down the coast of County Down, which Niamh describes as “hellish” and “amazing.”

Another adventure took them to Copeland Islands, which are normally closed to the public. They were granted permission to visit. A gale delayed them for two days on that trip.

And there was their visit to Dublin, where at high tide, they rowed under O’Connell Bridge, with barely any space between their heads and the bridge. “We put our hands up to walk our way under it. It was crazy,” says Niamh.

She enjoys the adventures because “The challenges make her feel fully alive.” How many adventures do people have in their lives these days, she asks? “We should be squeezing everything that we can out of life, living to the maximum.”

On a turbulent sea, she says, “Life is elevated from the ordinary. When you build a currach and row it to Scotland, it feels like you’re taking control, you’re fighting fear, you’re living bravely. You’ve got autonomy.”

During Covid Niamh and her teammates had to temporarily stop their adventures and currach-building. It has been tough, she says. “I’ve missed it very much.”

Before the first Covid lockdown, the team worked in a warehouse rebuilding the Fionnuala, one of the older currachs. A barge had accidentally crushed it. The rowers received compensation to rebuild the boat.

Under lockdown, they took parts of the currach home. Individually, they continued working on the restoration project. Once lockdown lifted, they rented accommodation on Rathlin Island and spent 10 days finishing the rebuild. Niamh says their hard work is evident by the 1,200 visible nails.

The time spent building currachs, she says, is time well spent because the boats will connect people for generations. “I feel like I’ve accomplished what I set out to accomplish. Everything else is a bonus now.”

Turbulence in the MacDonnell Race

On her return journey from Scotland and eighteen minutes in the wild MacDonnell race near Rathlin Island, the wind blows from the west, and the waves grow higher. Steering the currach is difficult. Niamh and her fellow teammate Paul are at the front of the boat.

To steady the vessel, working in unison against the waves, the crew puts their strength into their stroke, and they pull hard on their oars.

A short steep wave hits from broadside. The currach lunges. Niamh propels out of her seat. She holds her oar tightly and pulls against air.

Landing back in her seat, she positions herself. Barely recovered, another wave swallows the boat. The currach glides up and down, water splashes over the rowers.

The crew must work together. Everyone focuses on where the oar is and what everyone else is doing. They must pull hard together. Synchronized, they lean forward and backward, forward, and backward.

Niamh isn't worried. This crew is united. They will make it, she tells herself.

Eventually, they get to the point where the tide isn’t against them.

Niamh shouts, “Is everyone still on the boat? Her teammates laugh nervously.

Shaking from adrenaline and soaking wet, they wrap themselves in thermal tinfoil blankets. The water is calm. Exhausted, they remain stationary for hours. As the sun sets, they share a bottle of rum and tell silly jokes.

In darkness, the crew starts rowing again, staying close to the shore they safely navigate their way into Ballycastle Harbour.