Taoiseach refuses to rule out introduction of new COVID restrictions

Taoiseach Micheál Martin said that the Government "can never rule out" additional restrictions due to the rising number of COVID cases in the country. 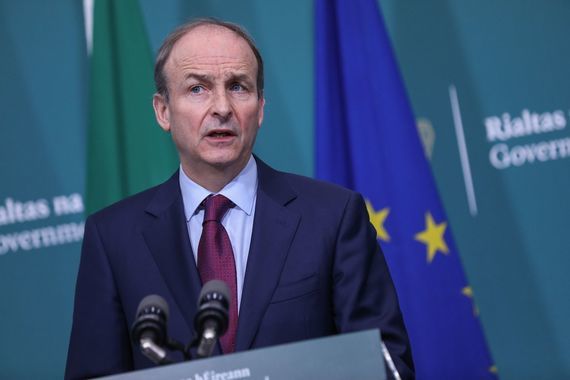 Taoiseach Micheál Martin said that he is "extremely concerned" by the current rate of COVID-19 infections in Ireland and warned that he cannot rule out the introduction of new public health restrictions.

Speaking to reporters in County Fermanagh on Sunday, Martin said that the Irish Government "can never rule out" the introduction of additional restrictions due to the rising number of cases in the country since the reopening of certain sectors in recent months.

He said that the cabinet's COVID-19 sub-committee will meet on Monday to discuss a potential pause on the full return to work, while it will also discuss the latest modelling from the National Public Health Emergency Team (NPHET).

However, he said that Ireland's high vaccination rate meant that it was unlikely that the country would return to a full lockdown.

"We are in a different position to last year so the language of lockdowns has to be looked at differently," Martin said.

"We are very highly vaccinated as a country, over 90 odd per cent [of adults]. That is important. We are in a different space to what we were last year."

Martin told reporters that he was "extremely concerned" about the high rates of infection in Ireland despite the country's impressive vaccination figures.

"That said we are extremely concerned, very concerned, about the high rise in numbers and indeed the impact that is having on hospitalisation, admissions to intensive care units and illness, but vaccination is protecting."

He added that Ireland's booster program is currently being rolled out and said that it would continue to expand in the coming months to give significant protection to vulnerable age groups.

He said that international evidence suggested that the booster third dose is "more impactful than the second dose".

The Government is also exploring the increased use of antigen testing to reduce the spread of the virus, the Taoiseach said.

"The Minister for Health will be bringing forward proposals in respect of a wider deployment of antigen testing and also making it that bit more affordable for people if we want to introduce a culture of greater utilization by people of antigen tests."

However, he said that the Government did not expect to make the antigen tests available for free.

The Taoiseach also said that the Government would make a decision early in the week regarding working from home based on advice from NPHET.

"From September we advocated a phased return to the workplace. That is about 50 percent now. That is one measure we have been asked to consider. It is important that we deliberate on that over a number of days,"

He urged people to reduce their levels of socialization and said that he can not rule out further restrictions if rates going to rise.