Syrian refugee Fadi Almasri has opened the first pharmacy in Ballon, Co Carlow after coming to Ireland with the help of the UN in 2014. 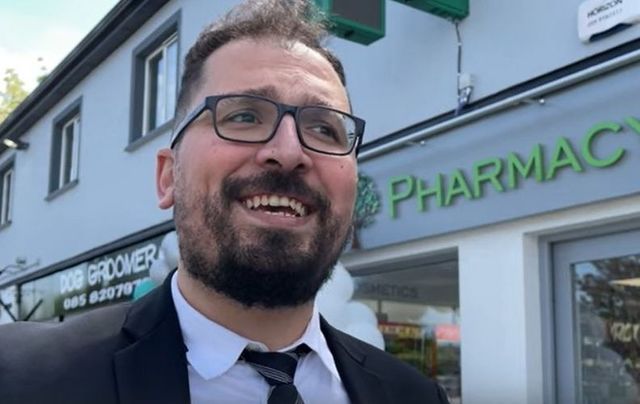 Syrian refugee Fadi Almasri, 34, has opened a pharmacy in Ballon, Co Carlow, a first for the Irish village.

Fadi Almasri is thankful to begin his new future in Ireland after opening his Ballon Pharmacy on Main Street in Ballon, Co Carlow on June 21.

Almasri and his family fled their native Syria for neighboring Jordan when the uprising against Bashar al-Assad began in 2011. In Syria, Almasri's home and pharmacy were destroyed.

In 2014, he and his family were amongst the first Syrian refugees to come to Ireland under a resettlement programme operated by the United Nations Refugee Agency and the Irish Government.

After spending three months in the Mosney direct provision center, Almasri and his family were relocated to Portlaoise in Co Laois where he says they received a warm welcome.

In Portlaoise, Almasri consulted with local pharmacist John Paul Shanahan and asked him for training in the Irish system.

"I told him my story and he told me everything about the Pharmaceutical Society of Ireland, the HSE, and how to become a pharmacist here," Almasri told RTÉ.

"That was the start of my pharmacy journey in Ireland - a journey which would eventually bring me to Ballon."

Almasri told KCLR that the opening of his pharmacy, Ballon's first, is "an exciting time."

The entrepreneurial pharmacist, who welcomed his first child just last month, told KCLR that his and his family's journey from Syria to Ireland was "long, hard, and tough" but that he feels lucky to have been able to flee Syria.

“You can’t imagine how much all the Syrians are happy here,” Almasri noted. He said it’s been amazing for him and his family to find themselves in a safe place surrounded by welcoming people.

“It’s the time to pay back Ireland,” Almasri said. “It’s time to start a new future here for me and my family, try to help the community here, and even to offer jobs for people.”

Almasri said he has three people from the local area working with him in his new pharmacy.

"I'm not looking back," Almasri told RTÉ. "I'm just looking to the future for me and my family. I would tell anyone who has the opportunity of a new life, to take it."