Syrian refugees who have settled in Ballaghaderreen, Co. Roscommon went to Croke Park to cheer on Mayo and Roscommon in the GAA quarter-finals. 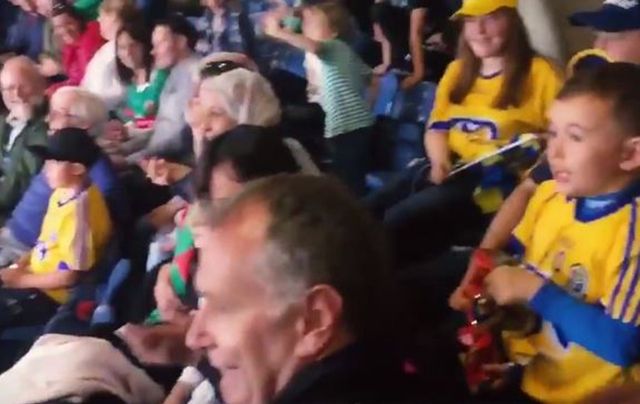 Syrian refugees who have settled in Ballaghaderreen, County Roscommon went to cheer on Mayo and Roscommon in the GAA quarter-finals

It would have been the most Irish of scenes except for the fact that on this day the majority of supporters in the bus had escaped war ravaged cities like Aleppo for a new life in the colder but notably welcoming climate of the west of Ireland.

Proud to have been standing nearby while some amazing people put this video together pic.twitter.com/LcJ0dnQQ6N

Rising early they filed onto a coach bound for the big smoke like generations of Irish GAA fans before them. What they may not have known, and what they’re slowly beginning to learn, is just how deeply their country colors connect them to their new homes and new neighbors. The small Roscommon town previously made headlines in January when it was announced that over 80 Syrian refugees would be settling there.

This is a special trip. On a coach to Croke Park with Syrians living in Ballaghaderreen pic.twitter.com/pRTRAeazwc

The great story of Ireland is one of exile and return. It seems we have learned something in the process about welcoming other exiles.

Loading onto the bus with a giant box of Chipsticks, the official snack of rural Irish sports events, the Syrian supporters were a range of ages and backgrounds with one prime directive: to have the craic.

As the viral video that follows their extraordinary and completely ordinary fans day out testifies, the alchemy that is Irish banter is quickly taking hold of them all. Asked what they thought of the match and the day out, one lad from Aleppo replied in perfect Hiberno Irish, “It was grand.”

He’ll be a local in no time if he keeps that up.

This heartening viral video is a reminder that Ireland is the country you think it is – and the Irish really are the people that you think they are.

Watch it and feel pride for all our futures.