Images of the posters first circulated on social media at the beginning of the week and feature an image of a heterosexual couple alongside a "straight pride" caption. 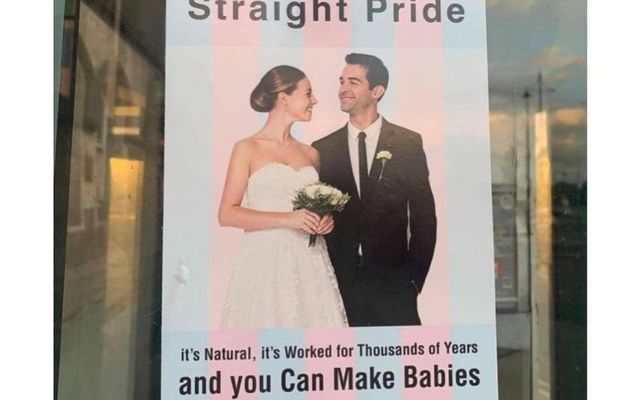 Images of the posters first circulated on social media at the beginning of the week and feature an image of a heterosexual couple alongside a "straight pride" caption, which claims that "it's natural, it's worked for thousands of years, and you can make babies."

Twitter user Michelle Byrne, who highlighted the issue on social media, told Extra.ie that the posters were "all around town" and "all along the Quay".

"They were A4 sized posters, printed quality, all over the inner city. People are getting in touch to say they’ve seen them, but we think we have most of them down now," Byrne told Extra.ie.

Homophobic hate on show in Waterford City again tonight - covered the place in ‘straight pride’ posters. This follows the burning of a Pride flag and the cutting down of the replacement Pride flag in just over a week. #Pride pic.twitter.com/OMQdQBhhn0

The incident comes just days after flags celebrating pride were cut down and burned outside the offices of Waterford City & County Council.

The flags were set alight on June 6 just two days after they were raised. They were cut down again last Saturday after the council had replaced them.

Mayor of Waterford Cllr Damien Geoghegan described the burning of Pride flags as a "despicable act" and said that the matter had been reported to An Garda Síochána.

Geoghegan said that the council would be raising more Pride flags throughout the city in the coming days.

A man in his 40s has been arrested in connection with the burning of Pride flags outside the Menapia building on the Mall on June 6.

Moninne Griffith, the chief executive of BeLong to Youth Services, told the Sunday Times that the burning of Pride flags and the appearance of "straight pride" posters was causing distress for the local LGBT community.

"We work with a support group in Waterford where a lot of the young people were involved in getting the pride flag up, so this is really upsetting for them to see. Even though it is just a handful of people, or maybe one person doing this, it creates a chilling effect for many young people who already struggle to come out," Griffith told the Times.

Paul Fagan, chief executive of LGBT Ireland, said that he hoped the recent homophobic incidents would increase public support for the LGBT community.

"What we want to see now is people coming out in support of the LGBT community — buying Pride flags and hanging them outside homes so that LGBT people know the majority support them," Fagan told the Times.

Fagan said that the majority of Irish people did not support the straight pride posters or the burning of Pride flags but said that there had been an increase in far-right ideologies recently. He urged people to take action and keep fighting for progress.