Ireland is bracing for Storm Eunice as a Status Red weather warning has been put in place in some counties and schools in several counties will be closed. 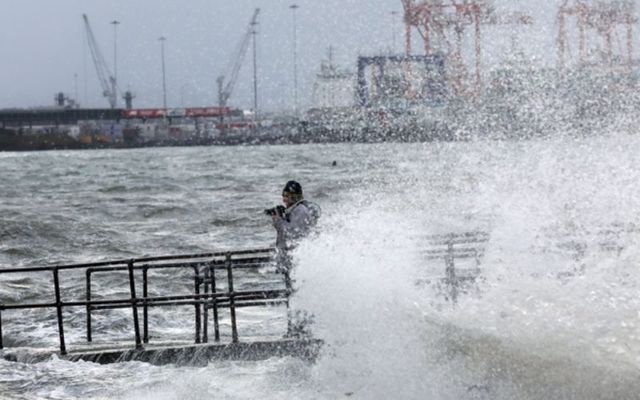 A photographer braves the conditions during Storm Barra in December. Rolling News

Schools and colleges in seven Irish counties are to close on Friday amid Status Red and Orange weather warnings in place for Storm Eunice.

Schools in all other counties will be able to open subject to local conditions.

Bonnie Diamond, Communications Meteorologist at Met Éireann, told RTÉ that red weather warnings are "relatively rare" and added that there is a "real danger to life" in areas affected by a Status Red warning.

"They are not often issued by Met Éireann. They're reserved for the most dangerous and most severe, most impactful weather conditions and that means that there is a real danger to life," Diamond told RTÉ.

"If you don't need to go outside, don't," she added, stating that people should stay away from coastal areas.

She said the strongest winds will be recorded in the southwest of the country, where winds will have the potential to cause structural damage.

"Storm Eunice is developing in the Atlantic as we speak and it will push in across Ireland later tonight, bringing a spell of extremely strong winds early through Friday morning as well as spells of strong, heavy rain and snow," she said.

She said wind gusts will reach speeds of up to 130 k/hr and potentially cause damage to buildings, trees, and power lines.

Weather warnings are in place across Ireland, including Red #wind and Orange #snow warnings⚠️ https://t.co/OIX2hevnAP

Met Éireann's Evelyn Cusack said the storm will make its impact from midnight tonight, while there will be a risk of coastal flooding from around 6 a.m. on Friday due to high tides.

Meanwhile, snowfall will be particularly in the northwest of the country in the early hours of the morning, she said.

She added that the storm will move quickly across the country from midnight until 9 am on Friday.