Storm Barra, currently forming in the Atlantic Ocean, presents a "danger to life" in Ireland over the next 48 hours, according to Met Éireann. 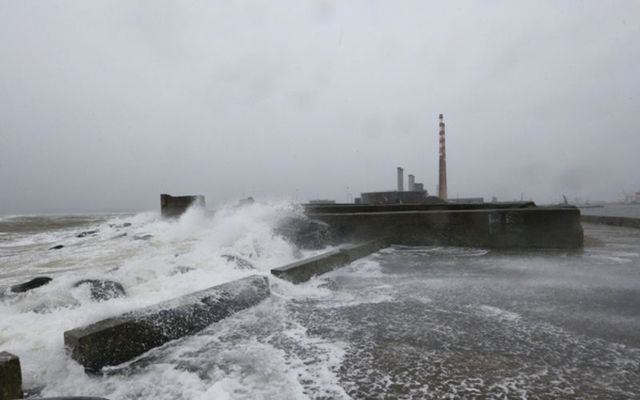 Ireland is braced for a "weather bomb" on Tuesday with a risk of snow and flooding over the next two days.

Met Éireann forecaster Evelyn Cusack said on Monday that Storm Barra is currently forming in the Atlantic Ocean and said that there is a "danger to life" over the next 48 hours.

🚨#StormBarra will bring disruptive weather to Ireland on Tuesday and Wednesday, with impacts from severe, damaging winds 🌬️ as well as heavy rain 🌧️ 🚨#Wind and #rain warnings are in place across Ireland ⚠️

The meteorological service says that the storm will bring winds in excess of 130 km/h and adds that there will be a risk of flooding in coastal areas due to a combination of high waves, storm surge, and high tide.

It further warns that power supplies and travel services are likely to be disrupted when the storm hits.

Met Éireann issued a Red wind warning for Cork, Clare, and Kerry on Tuesday, forecasting "strong and damaging winds" throughout the day.

A red wind warning is now in place for #Cork and #Kerry, as #StormBarra brings widespread strong and damaging winds to Ireland tomorrow & Wednesday.

It has also issued an Orange Weather Warning for Limerick, Waterford, Wexford, Galway, and Mayo from 6 am on Tuesday until 6 am on Wednesday. A similar weather warning has been issued for Dublin, Wicklow, Louth, and Meath from 8 am to 1 pm on Tuesday.

A Yellow wind and rain warning will be in place across the country from 2 am to 6 pm on Tuesday.

A Status Red Marine warning is additionally in place on Monday from Roche's Point to Valentia to Erris Head, with Storm Force 11 winds expected.

The UK Met Office has also issued a Status Yellow wind warning for Northern Ireland on Tuesday and said that most areas would be affected.

Cusack told RTÉ News that the storm will hit the country between 4 and 5 am on Tuesday and bring up to 70mm of rainfall.

She said that it will be a "very bad morning" throughout the country with gale-force winds accompanied by driving rain and snow in places.

She urged people to take precautions against the incoming storm, including tying down garden furniture and securing outdoor Christmas decorations.

The Department of Education has advised all schools in any areas with Red or Orange Weather Warnings to close on Tuesday.

Due to the significant nature of Storm Barra, as forecast by Met Éireann, the Department is advising that all schools covered by the Red Alert and Orange warning from Met Éireann should not open tomorrow, 7 December. Full statement here: https://t.co/kk7odRTi0X

Ireland's Department of Further and Higher Education is advising all universities, colleges, and further education facilities in the areas under warning to not open.

🚨 Due to the significant nature of #StormBarra the Department is advising that all universities, colleges and further education facilities covered by the Red and Orange wind warnings from Met Éireann should not open tomorrow, 7 December. pic.twitter.com/iK8zTcgJu6

Meanwhile, An Garda Síochána has advised all road users to beware of falling trees and urged the public to stay away from cliff walks and other coastal areas.

Cork Airport has also announced that early-morning Aer Lingus flights to London and Amsterdam have been canceled due to the incoming storm.

The National Emergency Coordination Group has urged people living in areas with a Red Weather Warning to remain indoors until the warning expires.