A new poll shows that Sinn Fein's popularity has shrunk by 5 percent in the last month. 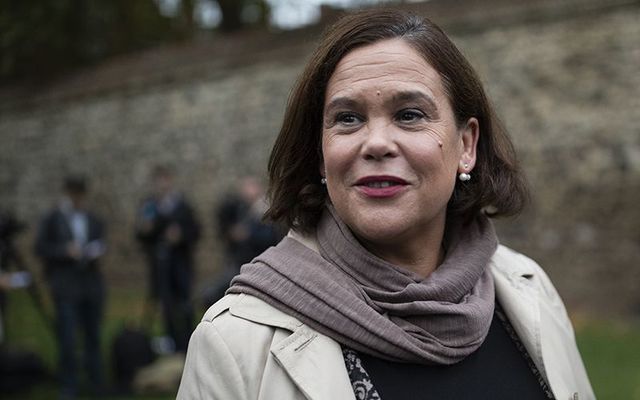 Sinn Fein’s popularity has plummeted after party leader Mary Lou McDonald posed for a picture with an “England Get out of Ireland” banner in the New York City St. Patrick’s Day parade.

"It's a very direct political statement, it's an anti-partition statement.

"I know it was taken by some to be directed at English people. It certainly was not and is not."

"All of us have to be conscious of not just what we say and what is meant but also what is heard and what is understood.

"For anybody who felt that it was directed at English people I just want to reassure them that that's not the case. Indeed I have blood relatives myself who are English and English people are very welcome in Ireland.

"Many of them live amongst us, they are our neighbours and our friends so certainly I apologise to anybody who felt that the banner was intended in that way and I'm happy to clarify that it's not. It certainly doesn't mean that."

"But as to the political sentiment behind the banner in terms of ending partition, now in particular as we face into the chaos of Brexit, decided upon in London, in England by politicians and political forces there, I cannot apologise for being a united Irelander and for wanting unity and democracy for Ireland," she told RTÉ's Drivetime.

"In fact far from apologising for it I wear that political position as a badge of honour."

The poll, which used data gathered from 1,000 adults between March 21 and March 28, was conducted by the Sunday Business Post and Red C Polling.

The poll results also showed that Fine Gael remains at 31 percent, while Fianna Fail is up one point to 25 percent.

The Social Democrats, the Independent Alliance, and the Green Party all received 3 percent, and the Solidarity-People Before Profit received 2 percent.

Unchanged were Independents with 15 percent and Labour with five percent. Renua and Peadar Tóibín's new party Aontú are on less than 1 percent.

The Independent points to Sinn Fein party leader Mary Lou McDonald’s picture with an ‘England Get Out of Ireland’ banner as the reason for the shrinkage.

Tanaiste Simon Coveney said McDonald’s photo, which was taken at the New York City St. Patrick’s Day parade on March 16, was “offensive, divisive and an embarrassment.”

@MaryLouMcDonald this is NOT leadership - it’s offensive, divisive and an embarrassment - grow up, this is NOT #ireland in 2019! we are better than this!  https://t.co/LUbfbvOe6l

Sinn Fein responded in a party statement: "The most divisive and offensive act on this island for almost the last 100 years has been the partition of Ireland.”

“It should come as no surprise that Sinn Féin wants a new united Ireland under the provisions of The Good Friday Agreement.

“However if Simon Coveney and the government is serious about achieving a new and agreed united Ireland then he should immediately convene an all-Ireland forum on Irish unity," a party statement read.

Hugh O'Connell, Political Correspondent with the Sunday Business Post, said on Newstalk Breakfast that Sinn Fein was up 5 percent in last month’s poll.

"That had a lot, I think, to do with the coverage [the party] was getting over the no confidence motion in Minister for Health Simon Harris, and the rolling controversy over the overspend in the National Children's Hospital.”

"It's dropped back down to 13 percent in this morning's poll, which is kind of reflective of where it has been at since last November."

What do you make of the latest poll results? Let us know in the comments