Simon Coveney laid a wreath at the "Survivor Tree" at the 9/11 Memorial in New York City on Thursday before visiting the 9/11 Museum. 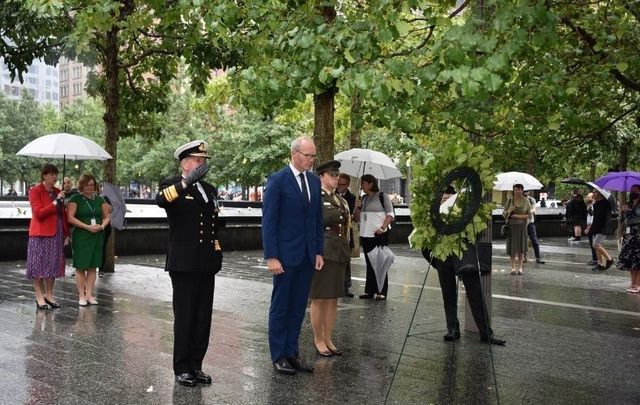 Simon Coveney (center) lays a wreath at the 9/11 Memorial. Department of Foreign Affairs

Ireland's Minister for Foreign Affairs Simon Coveney visited the 9/11 Memorial and Museum in New York City on September 9 to mark the 20th anniversary of the attacks on the World Trade Center.

Coveney paid his respects to the 2,996 people who lost their lives on 9/11 and was greeted by staff at the Memorial in addition to Seán Egan, who lost his father Martin in the attacks on the World Trade Center.

Egan's father was an FDNY Captain on 9/11 and was a member of the fire department's Emerald Society, a fraternal organization for firefighters of Irish heritage. He was 36 when he died.

Egan, who co-founded the 9/11 Memorial & Museum Visionary Network, showed Coveney inscriptions of the names of all victims of the 9/11 attacks, including his father.

Coveney then laid a wreath at the "Survivor Tree" that was planted at the 9/11 Memorial in 2010.

The pear tree was found amongst the rubble at Ground Zero and nursed back to health before it was planted at the memorial as a sign of endurance and strength.

Coveney also stopped to read the names of the Irish people who perished in the attacks, including 46-year-old businesswoman Ruth Clifford McCourt, who was among the passengers on United Flight 175 along with her four-year-old daughter Juliana.

Coveney said that his visit to the 9/11 Memorial and Museum was an "incredibly moving experience".

"Visiting the 9/11 memorial today, 20 years after the tragic loss of so many lives, was an incredibly moving experience. So many Irish and Irish-American people were affected by the events of that day, including many from the emergency services who were the first to respond when the attacks took place," Coveney said.

"I wanted to come here and remember those people, and the loss felt by their family and friends. This beautiful Memorial will help ensure that we never forget those who lost their lives that day."

Coveney was joined at the 9/11 Memorial by Consul General of Ireland Helena Nolan and  Vice Admiral Mark Mellett of the Irish Defence Forces.