The daylight shooting outside the Hilton Hotel Kilmainham in Dublin has prompted one Irish politician to call upon the Garda Commissioner to prioritize "a high visibility policing operation." 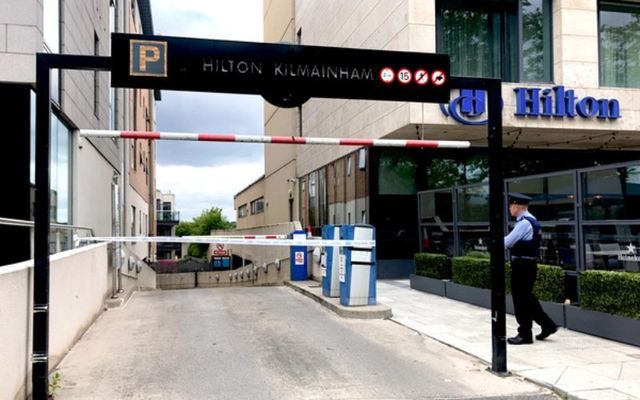 June 24, 2022: Gardaí outside the Hilton Hotel Kilmainham at the scene of a shooting that occurred at approximately 11:30 am. One male has been taken to hospital to be treated for serious injuries. The scene is currently preserved and a technical examination is to be conducted. RollingNews.ie

A man has been seriously injured following a shooting incident in the car park of the Hilton Hotel in Kilmainham, South Dublin, just before noon on Friday.

Gardaí said that they responded to the scene of a shooting incident that had occurred at approximately 11:30 am today, June 24 on the South Circular Road in Kilmainham, Dublin 8.

One male was taken to the hospital to be treated for serious injuries, Gardaí said.

The scene was preserved so a technical examination could be conducted.

No arrests have yet been made and investigations are ongoing.

Gardaí appealed for witnesses and for dashcam footage from the South Circular Road in Kilmainham this morning.

The Irish Times reports that the 41-year-old victim has lost a lot of blood but that he was conscious while being taken to hospital. It is the third time that the man has been the victim of a shooting attack in the last two years.

The man sustained minor injuries to the neck following a shooting in West Dublin in 2020 and was shot twice in the back in a separate West Dublin shooting last year.

Responding to Friday's shooting, Green Party justice spokesperson Patrick Costello said that said "there has been evidence of an escalating issue with gang related gun violence in Dublin 8 in recent months which is putting innocent members of the public at severe risk.

"Today's shooting has taken it to a new level with a brazen attack in broad daylight where the public could have been caught in the crossfire."

Costello stated "the Garda Commissioner needs to prioritise a high visibility policing operation to ensure public confidence that law and order prevails in Dublin 8 and that it is safe for people to go about their business. If there is any issue with resourcing that needs to be addressed immediately by the Minister for Justice."

The "It's Always Sunny" gang unveils their own Irish whiskey - for a good cause!