Irish fans have been put off by outrageous ticket prices and the fight's lack of credibility. 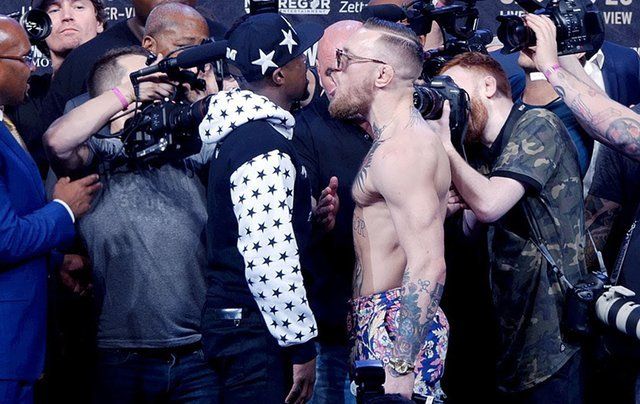 Mayweather and Conor McGregor stand off in Brooklyn.

Outrageous ticket prices and lack of credibility of the fight are stopping Irish fans from attending the McGregor/Mayweather fight in Las Vegas on August 26th, with Irish bookings only half of previous fights.

Top Irish travel agents Sunway, Tour America, Manning Travel and Dawson Travel are all reporting a big drop, according to the Irish Independent.

A spokesperson from Manning Travel said ticket prices for the actual event were steep: "The level of interest is down compared to previous Las Vegas fights. Most fans are heading out for the 'craic' and maybe to get a ticket to the weigh-ins ...”

Paul Dawson, of Dawson travel in Cork, stated the interest for the Mayweather fight was about half of the previous Jose Aldo fight which was a major success.

"The interest has not been as high as previous fights. There's been a noticeable drop, probably halved from the [Jose] Aldo fight. People are concerned whether or not they're going to be able to get tickets.

"You'd usually have people book and they already have tickets, or they're going to try and get them when they're over there, but unless they can get a ticket they're not really going to book anything."

Despite the hype, the credibility of the fight seems to have put fans off, reports the Independent.

“The fight has very little credibility among sports fans,” the newspaper reported.

Floyd Mayweather's promoter Leonard Ellerbe has stated he has no worries about slow sales or reported lack of bookings for major hotels including several hotels operated by MGM Grand, which owns the T-Mobile Arena.

Polly Bond, commercial manager for Tour America said it was “quite unusual” to have so many hotel rooms available and claims that fight was biggest ever did not jibe with the ticket sales and hotel occupancy with the fight only three weeks away.

"We're very excited and very happy with ticket sales so far," Ellerbe claimed to the Associated Press. "We're well on our way to smashing our own record which transcended the sport."