“To be Irish is to know that in the end the world will break your heart,” Mayor Ed Murray said at an emotional press conference. 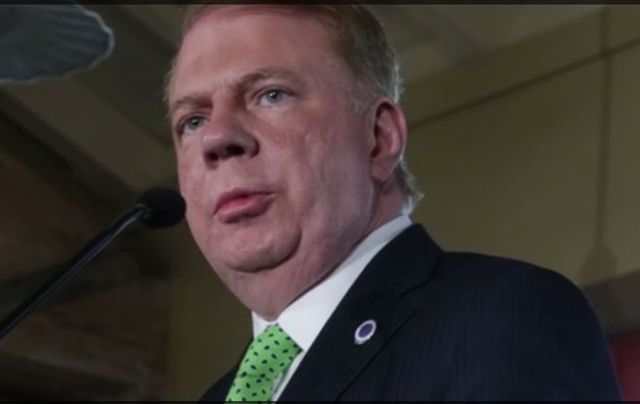 Embattled Seattle Mayor Ed Murray has announced he will not be seeking a second term this November.

The 62-year-old Irish American is being sued by Delvonn Heckard, who claims he was paid between $10 and $20 to have sex with the future mayor over a four to five year period starting when he was 15 years of age and addicted to crack cocaine.

After the allegation surfaced in April two further men – both of whom have criminal records – came forward to say that Murray had similarly abused them when they were under 18.

At the time Murray said the pending civil suit would not stop him seeking a second term – which he had until then been widely tipped to win – but now has said he will step aside.

Murray has denied the allegations from the beginning and said the lawsuit tried to “paint me in the worst possible historic portraits of a gay man.”

“It tears me to pieces to step away,” he told reporters at an emotional press conference near where he grew up. “But I believe it is in the best interest of this city that I love.

“The mayor’s race must be focused on these issues, not on a scandal, which it would be focused on, if I were to remain in,” he continued.

“It hurts those who have been victims of abuse. It hurts my family. It hurts [my husband] Michael.”

Wearing a green tie, Murray reflected on his Irish roots, recalling how he used to tag along with his mother as she knocked on doors for JFK.

“Since I was 12-years-old, politics has been my life and my dream. I lay on the grass of this beach, reading children’s books about FDR and JFK,” he said. “From that came my career. And I have the best job in politics – mayor of the city of Seattle.”

He concluded with a quote from former Senator Daniel Moynihan, “To be Irish is to know that in the end the world will break your heart.”

The news was welcomed by local labor leader David Rolf who said, “I think what we just saw was an act of selflessness” and the attorney acting for Heckard said his client, “feels like this is one step towards justice and achieving his cause of spreading truth.”

He added that Heckard, who is gay himself, “regrets the pain this situation has caused” Murray’s husband and family.

The lawsuit has been headlines news in Seattle for weeks now. Most sensationally Heckard’s claim included a description of Murray’s genitals as having an “unusual bump,” but the mayor’s legal team asked for the case to be dismissed following a medical exam by Murray’s doctor who found he had no distinctive mole or bump on his genitals or, for that matter, a scar that could indicate one had been removed.

“This is game-changing. This is the heart of the allegations, and they’re false,” his attorney told the Seattle Times.“ He has absolutely no credibility and the case should be dropped. And I ask his lawyers – now that they know – to drop the complaint.”

Lincoln Beauregard, Heckard’s attorney, hit back asking for a “neutral” doctor to conduct the examination.

Beauregard also hit the headline when he was fined $5,000 by a judge for a violating ethics standards and aggressive legal tactics.

King County Superior Court Judge Veronica Alicea-Galván reprimanded him for filing documents “for the sole purpose and intent of generating publicity” as opposed to furthering the legal process.

Beauregard insisted, “We respectfully disagree with the ruling – we think it’s unconstitutional – but this should be a small part of the case.”

However, Murray’s spokesman, Jeff Reading, hit out at the attorney. “Clearly, the judge was disturbed by opposing counsel’s antics, and is taking the rare but serious step of sanctioning him. Mayor Murray deserves a right to due process, and it is our hope that the court’s actions today will prevent opposing counsel from further undermining this basic right.”Now attention turns to the race to replace him. State Sen. Bob Hasegawa, D-Seattle announced his attention to run on Monday and others, such as local attorney Jenny Durkan, are also expected to throw their hats into the race.