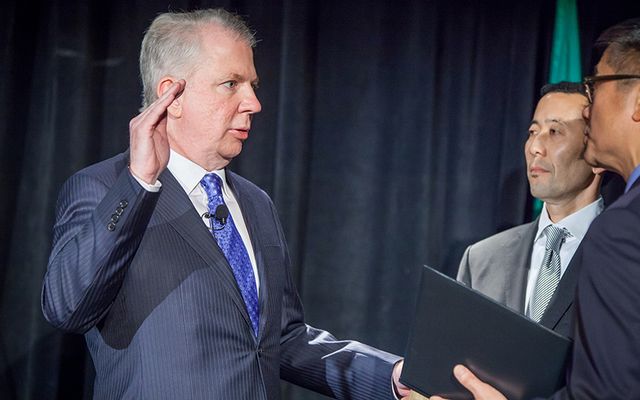 Seattle Mayor Ed Murray has been accused of sexual abuse. A lawsuit by a 46-year-old man alleges the mayor “raped and molested him” beginning when he was 15 years old and addicted to crack-cocaine. The Seattle Times is reporting two other men have claimed he did the same to them.

Murray is deeply involved in his Irish heritage and lived for a year in Ireland. His first overseas trade mission was to Dublin.

The lawsuit filed by “D.H.” in Kings County Superior Court alleges the mayor gave the teen between $10 and $20 in exchange for sexual favors.

“I have been dealing with this for over 30 years,” D.H. told the Seattle Times. He declared his decision to bring the issue before the courts is part of  “healing process” after decades of “the shame, the embarrassment, the guilt, the humiliation that I put myself through and that he put me through.”

D.H. says he first met the future mayor at a bus stop. There he claims Murray invited him back to his home; the pair bartered over whether D.H. should be paid $10 or $15. The two would go on to have sex at least 50 times over the course of the next four to five years.

The lawsuit includes Murray’s apartment number and telephone number from the period - which the Seattle Times describes as accurate. The mayor’s genitals are also described.

“And there’s times he would be doing certain things and I would tell him to stop and he wouldn’t stop, and I let it happen because I wanted that money so I can go get those drugs,” D.H. says.

The age of consent in Washington State then and now is 16 and D.H. says he told Murray he was underage before they first had sex. The statute of limitations on child rape has expired but D.H. is pressing ahead with a civil case - of which there is no cut off point for.

He says the death of his father has freed him to pursue the case where once he just wanted to keep the abuse secret.

The mayor - who is up for re-election this year - denied the allegations. “These false accusations are intended to damage a prominent elected official who has been a defender of vulnerable populations for decades,” his spokesman Jeff Reading told the media. “It is not a coincidence that this shakedown effort comes within weeks of the campaign filing deadline. These unsubstantiated assertions, dating back three decades, are categorically false. Mayor Murray has never engaged in an inappropriate relationship with any minor… Mayor Murray will vigorously fight these allegations in court.”

“At the end of the day, we’re going to defend this lawsuit vigorously,” his attorney Robert Sulkin told journalists an hour and a half after the allegations were published. “The mayor is going to do his job for the city of Seattle, and this accuser is going to have to explain himself.”

The 61-year-old Democrat was previously accused by two men, Jeff Simpson and Lloyd Anderson, of similar crimes in 2007. The pair said Murray abused them in the 1980’s when they were teenagers and raised their claims with Washington state legislators a decade ago. Now they’re willing to testify in court against the mayor.

Reading’s statement also touched upon Simpson and Anderson’s claims, saying, “The two older accusations were promoted by extreme right-wing anti-gay activists in the midst of the marriage equality campaign, and were thoroughly investigated and dismissed by both law enforcement authorities and the media.”

Both men have criminal convictions the Seattle Times said then State Senator, “hired an attorney, who worked to discredit the men largely based on their criminal pasts. Neither The Seattle Times nor other media publicly reported the allegations, and Murray’s political career continued to rise.”

Simpson, now married with two children, lives in Portland and when doorstepped by the paper said, “I would really like for him to admit it and to take responsibility… I don’t necessarily think that he destroyed my life, but I believe a lot of the problems I have stemmed from this.”

Both Simpson and Anderson say they were unaware of D.H.’s lawsuit and D.H. said he was not aware of the two other men’s prior claims.

Simpson alleges his own abuse started age 13. He had been kicked out by his adoptive parents aged 3 after he set fire to a Christmas tree, razing the family home to the ground. He was sent to a children’s center where he met Murray.

He says the pair were watching TV when Murray - then in his mid-20’s - began to stroke his legs.

“Hey … Jeff, can you keep a secret?... You really excite me,” Murray reportedly asked.

Murray then performed oral sex him. “I told him no, no, no … I don’t want to do any of this,” Simpson said. “I started crying… and we stopped.”

Aged 15 the pair moved in together and Simpson says, “the abuse was going on regularly” except he was now paid after they had sex. The money from which he used to buy drugs.

Anderson was living on the streets of Portland when he says his abuse first began.

“Look, the guy took advantage of my situation,” he told the Seattle Times. “I was young, I was homeless and doing drugs and everything.”

Then aged 17 he said he met Murray numerous times at his apartment and each time was paid between $15 and $30 for each encounter. The age of consent in Oregon at the time was 18 - the same as it is now.

D.H.’s attorney hopes to question the mayor under oath within 90 days. In the meantime, Murray’s own attorney said he will continue, “to do his job for the city of Seattle.”

Murray was first elected Mayor of Seattle in 2013 and was predicted to cruise to re-election. One of seven siblings he was previously a State Senator and a long-time champion of LGBT rights.

But on a personal level, he is also about his Irish and Catholic roots, and being gay and honest about it.

In an interview with IrishCentral in 2014 Murray said has kept in touch with his Irish roots all his life and has traced them to Fethard, Co. Tipperary, Patrickswell, Co. Limerick and Co. Down. “If I hadn’t entered politics I might have lived in Ireland,” he says.

Indeed, he spent a year in Belfast in 1974 working as a peace line volunteer at the height of The Troubles, dealing with both sides. It taught him the “value of dialogue, the dangers of parochialism” and the need to walk in the other person’s shoes.

As his personal contribution to helping in any way to end The Troubles he helped arrange the Seattle/Lisburn sister-city relationship, something he pledged to work on as mayor. The Lisburn deal has not always worked out. A few years back a unionist representative from there insisted on marching in the Seattle St. Patrick’s Parade waving a Union Jack. Things have gotten better since.

His year in Ireland also signaled a life-long interest in all things Irish. He reads the Irish Times weekend edition and followed the failed presidential campaign of his friend David Norris closely.