The Irish American mayor was accused of abusing his teenage cousin in the 1970s, an accusation he vehemently denies. 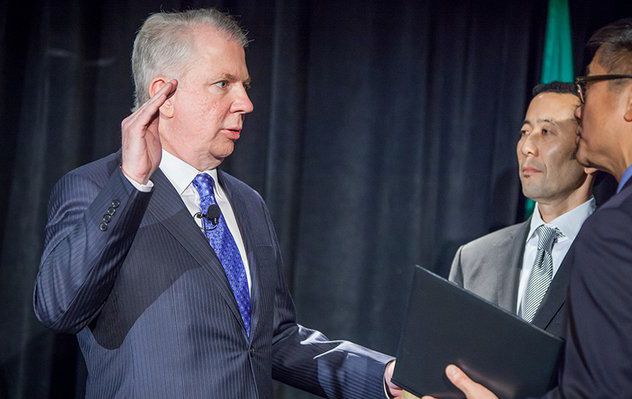 Ed Murray being sworn in as the Mayor of Seattle. WikiCommons

The Irish American Mayor Seattle Ed Murray will step down from the role as a further sexual abuse accusation roles in.

Prominent Irish American political figure Ed Murray will step aside as Mayor of Seattle following the revelation that the fifth accusation of sexual abuse has been filed against him. Murray’s first cousin once removed, Joseph Dyer, has claimed that Murray molested him as a teenager in the 1970s, leading to the mayor handing in his resignation, effective of 5 pm today. The Democratic politician vehemently denies all the accusations of abuse, claiming that the latest revelation is a result of a conflict between different factions of his family.

Nonetheless, the weight of the mounting sexual abuse accusations against him caused Murray to make the final decision to step aside, despite having already announced earlier this year that he would not seek a second term.

In a statement, Murray, one of seven children in an Irish Catholic family, announced that it had "become clear to me that in light of the latest news reports it is best for the city if I step aside."

"To the people of this special city and to my dedicated staff, I am sorry for this painful situation," he added.

While four men had previously accused Murray, 62, of sexual abuse, the fifth accusation came from his own cousin Dyer who told the Seattle Times that the abuse happened while Murray shared a room with the then 13-year-old in Dyer’s family home in Long Island, New York. Between 1975 and 1976, Murray stayed with his cousin, Dyer’s mother Maryellen Sottile, while working with a Catholic group home.

"There would be times when I would fake sleeping because I didn't want him touching me," said Dyer, now aged 54.

“And that’s when he would molest me,” continued the married father and Air Force veteran.

“And my mother would be right there in the house, she’d be in the living room … watching TV, at that time it was probably “M*A*S*H.” And my sisters would be in their rooms, sleeping. And I would be in my room, and he would be in there, molesting me.”

Murray confirmed that he lived with Dyer and Sottile when he was in his early twenties but denies that any sexual abuse ever took place, instead claiming there was a rift between the family for years.

“I did not sexually abuse any of her children,” Murray said. “There’s a larger back story between the Murrays and the Sottiles.”

“There’s been numerous fights between our two families for many years, and much ugliness. I guess they see me down and out, and they want to finish me off.”

A fifth man, Ed Murray's cousin, accuses him of molesting him as a teen. Also, this: https://t.co/o3Y1IRGKs5 pic.twitter.com/314HYD9uok

Dyer also claimed that the reason Murray left their family home was as a result of abuse claims that arose from the youth group where Murray was working. He claims his father negotiated with the Catholic group that Murray would leave the town if charges were not pressed. The group home confirmed that Murray worked with them during this time but do not have any records on the reason for his departure. Murray claims he left the home on good terms so as to attend college in Portland.

The fifth man to accuse Murray of sexual abuse since April 2017, Dyer stated that he is only revealing his accusation now because of frustration at the mayor’s constant denials. The other accusers, each with criminal pasts and drug history, claim Murray abused them as troubled teenagers while the Irish American politician was their counselor or their foster father.

Jeff Simpson reported Murray in 1984 after being removed from Murray’s home and although he was not charged, an Oregon Child Protective Services’ investigator found that Simpson had been sexually abused by Murray and he was no longer allowed to act as a foster parent.

Three others - Lloyd Anderson, Delvonn Heckard, and Maurice Lavon James - have also made claims, including allegations by Jones, 44, that Murray paid him for sex in the 1980s when he was teenage prostitute living on the streets.

Dyer told the Seattle Times that he decided to come forward after listening to Murray deny these other accusations.

JUST IN: Seattle’s gay mayor, Ed Murray, announces he’s resigning on Weds, after yet another allegation he molested a minor. He denies it. pic.twitter.com/JahBAbbhxS

“Because I saw … clips of (Murray) denying what he did, that pissed me off to the point where I am like, ‘That’s it. I have had enough.’ I have been carrying this around for 40-some years. Something has got to be done.”

Murray’s siblings have spoken strongly in defense of their brother.

“This is my cousin Maryellen jumping on board with a blood hatred,” said Sharon Murray Sottile, 68, Murray’s oldest sister. “Everything he [Murray] has ever worked for has been taken away from him.”