Scientists have discovered a rare shark nursery about 200 nautical miles off the west coast of Ireland. 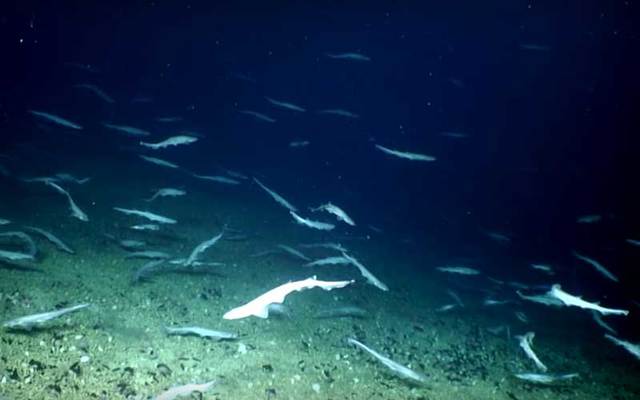 Scientists have discovered a rare shark nursery about 200 nautical miles off the west coast of Ireland.

The announcement was made at the INFOMAR Seabed Mapping Seminar in Kinsale on Thursday, BreakingNews.ie reports.

The discovery was made in July during the recent “SeaRover” survey by the Marine Institute’s remotely-operated vehicle (ROV) Holland 1, deployed onboard the ILV Granuaile.

A large school of Blackmouth catshark (Galeus melastomus) were present at the site, and it is believed the eggs are of this species. Also observed was a second more unusual and solitary species, the Sailfin roughshark (Oxynotus paradoxus), which may have been feeding on the eggs, although the scientists said they did not observe this.

Both species are on the International Union for the Conservation of Nature (IUCN) “red” list of threatened species. Ireland is obliged to monitor deepwater sharks under the Marine Strategy Framework Directive, The Irish Times reports.

The shark nursery was observed within one of Ireland’s six offshore Special Areas of Conservation (SACs) designated under the EU Habitats Directive for Annex 1 reefs.

Scientists said that such a large concentration of egg cases are “rarely recorded and indicate females may gather in this particular area on the seafloor to lay their eggs.”

David O’Sullivan, of INFOMAR and chief scientist on the SeaRover survey (Sensitive Ecosystem Analysis and ROV Exploration of Reef habitat) said the nursery was of a scale "not previously documented in Irish waters."

"This discovery shows the significance of documenting sensitive marine habitats, and will give us a better understanding of the biology of these beautiful animals and their ecosystem function in Ireland’s Biologically Sensitive Area," he said.