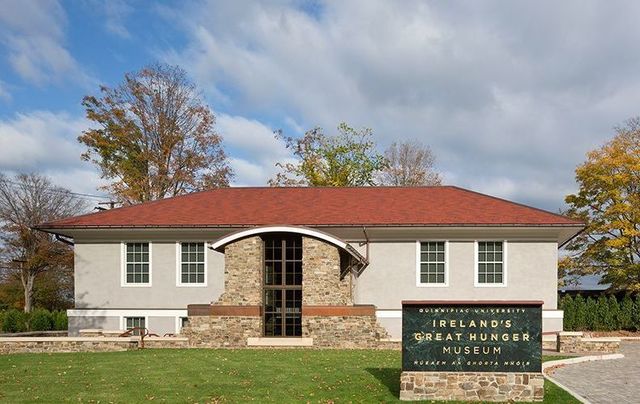 Quinnipiac’s Ireland Great Hunger Museum is continuing with their St. Patrick’s Day programs after its funding has come into question.

On Facebook, the Museum shared the events that will be hosted on St. Patrick's Day weekend which will focus on people sharing their immigration stories:

Admission to the immigration stories events over the St. Patrick’s Day weekend is included with the $5 general admission fee. Admission is free for children, Quinnipiac faculty, staff and students, and museum members.

The Museum is also still hosting their exhibition “Making America: The Irish in the Civil War Era” through Sunday, March 17 which has been running for nearly a year.

The New Haven Register reports that on March 21, the Arnold Bernhard Library at Quinnipiac University will host a new exhibit, “James Hack Tuke: Quaker Philanthropist and Friend to Ireland’s Poor,” which will run through September at Quinnipiac’s Mount Carmel campus.

In June, the Institute will also host a three-day conference “Famines in Ireland before 1845 and after 1852."

In January, Quinnipiac University, under new leadership from President Judy Olian, announced that it would end it’s annual sponsorship of the New York City St. Patrick’s Day parade, and would no longer be marching in the parade. It also announced that it wants the Ireland Great Hunger Museum to become self-sustaining.

A  statement from the University said: "Given our many student-centric priorities, our hope is that Ireland’s Great Hunger Museum identifies diverse sources of support for its programs and initiatives, including philanthropy."

A later statement from Olian read: “We are in the midst of a comprehensive and inclusive strategic planning process to determine where additional investments or reallocated resources are needed – in people, programs and facilities. This includes Ireland’s Great Hunger Museum.”

"The board of trustees and I established a goal of financial self-sufficiency for the museum by June 2020. Accordingly, the museum is seeking to raise philanthropic support as well as self-generated funds to continue operations amidst the many vital learning and scholarly imperatives of the university.”

The Ireland Great Hunger Museum, which costs about $350,00 annually to operate, is now appealing for support via philanthropy and donations.