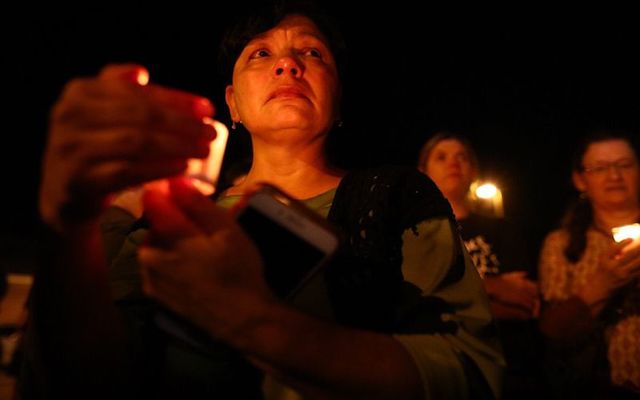 A candle-lit vigil to remember the 28 people killed by an ex-airforce man who should not have had access to guns. Justin Lee / Twitter.

A 26-year-old former US Airforce airman entered a Baptist church near San Antonio, Texas, on Sunday, wearing all-black tactical gear and a ballistic vest. He opened fire killing 28 people and wounding at least 30 others. Due to his criminal history, he was disqualified from owning firearms.

This is the 377th mass shooting in the USA in 2017 and the deadliest massacre in a house of worship in the country’s history. Texas Governor Greg Abbott described the attack as “pure evil”.

Devin Patrick Kelley was found shot dead in his SVU after a high-speed chase involving armed civilians. It is not known if the fatal gunshot was self-inflicted.

The authorities, as yet, have not confirmed how Kelley gained access to his collection of weapons, which included a semi-automatic rifle, AR-15-type gun. Several other guns were found in his SVU. Kelley was not eligible to own firearms due to a dishonorable discharge from the Airforce and domestic abuse charges.

It is currently not known if Kelley is connected to any terrorist group. The FBI crisis response team is on scene to offer assistance to local police.

What happened on Sunday morning?

On Sunday morning at 11.20am witnesses first saw Kelley at the gas station, on Valero, across the street from the First Baptist Church, in Sutherland Springs, a small community, 30 miles southwest of San Antonio, Texas.

Texas Department of Public Safety’s Regional Director, Freeman Martin, said “The suspect crossed the street to the church, exited his vehicle and began firing at the church. The suspect then moved to the right side of the church and continued to fire."

Sunday service was in progress at the time. Kelley’s victims ages ranged from five-years-old to 72-years-old.

As he exited the church a neighbor engaged in a gun battle with the shooter. Then a car chase ensued. Johnnie Langendorff told CBS “I just pulled up to an intersection and saw gunfire.

"The gentleman with the rifle came to my truck as the shooter took off, and he briefed me quickly on what had just happened and said that we have to get him.

“We just take pursuit. And like I said, we hit about 95 trying to catch this guy until he eventually lost control on his own and went off in the ditch.

Minutes later the police arrived at the scene and found the suspected dead.

“The local citizen pursued him,” said Martin, a regional director for the Texas Department of Public Safety. “We don’t know if it was a self-inflicted gunshot wound or if he was shot by our local resident who engaged him in a gunfight.”

Kelley served as a logistical readiness airman at Holloman Air Force Base, in New Mexico, from 2010 to 2014. According to Air Force spokeswoman Ann Stefanek, he was court-martialed in 2012 for assaulting his wife and child. He was sentenced to 12 months in military prison and received a reduction in rank. He was given a dishonorable discharge from the Airforce in 2014.

It is illegal to sell firearms to someone who has been given a dishonorable discharge. The LA Times points out:

“The 1968 Gun Control Act made it unlawful for a licensed firearms dealer to sell a weapon to a person with a dishonorable discharge or for such a person “to ship or transport in interstate or foreign commerce, or possess in or affecting commerce, any firearm or ammunition; or to receive any firearm or ammunition which has been shipped or transported in interstate or foreign commerce.”

It is also illegal for people convicted of domestic violence to own or buy guns.

The attacker used a Ruger assault-style weapon in the attack and multiple firearms in his vehicle.

According to the Daily Beast Kelley recently posted this image of a semi-automatic rifle on his Facebook page with the caption “She’s a bad bitch”. The authorities would not confirm if this was the weapon used in the attack.

CNN has reported that Kelley purchased a Ruger AR-556, in April 2016, from Academy Sports & Outdoors store, in San Antonio.

They report that according to a law enforcement source “when Kelley filled out the background check paperwork at the store, he checked the box to indicate he didn't have disqualifying criminal history, the official said. He listed an address in Colorado Springs, Colorado when he bought the rifle.”

The 28 victims of the massacre

Currently reports state that 28 people were killed in the incident at least 30 were injured. Twenty-three people were found dead inside the First Baptist Church, two outside and another person, who was transported from the scene of the crime has since died. News of the victims is continuing to develop.

Joe and Claryce Holcombe lost eight members of their family in the massacre, including children, grandchildren and great-grandchildren.

Among the dead were Joe's 60-year-old son Bryan, who had been preaching at the church, his wife Carla (58) and Joe's granddaughter-in-law, Crystal Holcombe, who was pregnant. Three of Crystal's children, Emily, Megan and Greg, were also killed. Crystal's unborn child also did not survive. Joe’s grandson Marc Daniel Holcombe and his infant daughter were also killed.

Sherri Pomeroy, wife of the church’s pastor Frank Pomeroy released a statement announcing that her teenage daughter was among the victims. She said she and her husband were out of town when the shooting took place.

She stated "We lost our 14-year-old daughter today and many friends. Neither of us have made it back into town yet to personally see the devastation."

Sandy Ward told MSNBC that four of her grandchildren and her daughter-in-law were inside the church. The youngest, aged 5, was in surgery, and her 7-year-old granddaughter died.

She said her son is waiting for answers. “He's a wreck, of course, as you can imagine.

The shooter was from New Braunfels, Texas, just 35 miles north of where the massacre took place. He grew up in a home worth nearly $1 million.

Police raided his current home in the town of New Braunfels on Sunday afternoon.

The Albuquerque Journal report that Kelley’s first marriage ended in divorce in 2012. He was married in 2011 in New Mexico and was sued for divorce in October 2012, according to court documents. The couple had no children together, but the wife had a child from a previous relationship.

In 2014 Kelley got married again, to Danielle Lee Shields, according to CBS. It’s believed that Shields family are based in Sutherland Springs, due to a P.O. box address listed in wife’s mother’s name.

Kelley’s uncle, Dave Ivey, told NBC “I never in a million years could of believed Devin could be capable of this kind of thing.

“I am numb. … My family will suffer because of his coward actions. … I am so sorry for the victims in Texas.”

Is it time that gun control laws be reviewed and revised at the highest levels of US government? Let us know your feelings on the matter below.