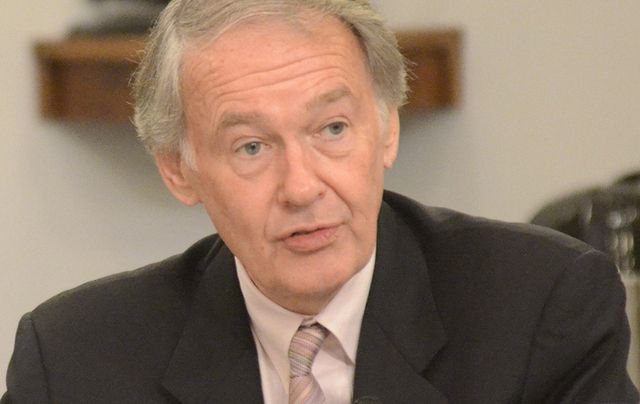 He elaborated that Massachusetts became “one of the few states, believe it or not, that requires basic consumer safety features on firearms before they can be legally manufactured or sold in the state. These are the kinds of commonsense reforms we need nationwide today.”

Many of the reforms were enacted after the Democrats lost control of Congress after President Clinton signed the Brady Handgun Violence Prevention Act, which mandated background checks for those buying firearms.

In true blue Massachusetts the Republicans’ triumph in the 1994 elections galvanized gun control advocates and the Stop Handgun Violence (SHV) campaign was founded by businessman John Rosenthal and the late Michael Kennedy,  whose father, RFK, and uncle, JFK, are the two most famous victims of gun crime since Lincoln.

For the next four years the SVH campaign spearheaded a media and public education effort that culminated in the Massachusetts Gun Control Act of 1998.  The new law banned individuals convicted of violent or drug-related crimes from owning guns, banned semiautomatic assault weapons and brought in much tougher penalties for those who stored their guns unlocked.

At the time Republican Governor Paul Cellucci praised the bill, saying, “It will save lives and help fight crime in our communities.”

SHV said at the time that it would, “certainly prevent future gun violence and countless grief” and Senator Markey credits it and the federal Brady Act with a 60% drop in deaths from gun crime since 1994.

Since federal legislation was signed the number of murders in the state has dropped. In 1994  214 murders were recorded in the state compared with 134 committed last year.

However, critics believe that the law has only cracked down on law-abiding gun ownership and it’s been a boon to criminals.

“Since 1998, gun crime in Massachusetts has gotten worse, not better,” Boston Globe columnist Jeff Jacoby wrote, citing the 122 murders in 2011 committed with firearms against the 65 in 1998.