Sculptor Aidan Harte said "people can go see The Scare from Clare for themselves" after the new home for his Púca statute was confirmed by Clare County Council. 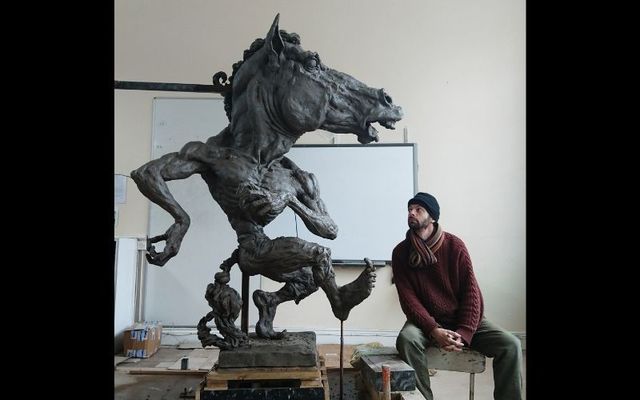 A statue of Púca, an Irish mythical creature, that was described as "sinister" by some locals in Ennistymon, Co Clare last year has finally found a new home in The Burren.

"The Púca of Ennistymon" by Irish sculptor Aidan Harte drew strong reactions when it was unveiled last May, ultimately forcing Clare County Council to engage in a public consultation process about what to do with the statue.

Inspired by Irish folklore and the locality’s equine heritage, the 2-meter tall bronze art piece had been commissioned by Clare County Council in early 2021 as part of a capital project investment aimed at “increasing visitor dwell time" in Ennistymon.

Among the objectors was Fr Willie Cummins who told mass goers that there was "something sinister" behind the statute.

“It will never be erected, I can guarantee you," Fr Cummins reportedly said. "It looks nasty.”

In January, Clare County Council confirmed that it would be searching for a new home for the Púca statue outside of Ennistymon. Harte said at the time that it was "a shame."

Now, Clare County Council has confirmed that it has selected the Michael Cusack Centre in Carron in The Buren to be the Púca statue's new home. The Centre beat out Ballyvaughan Community Development Group in the adjudication process led by the Council.

In their citations, the judges said: “While both applicants put forward compelling arguments for hosting the sculpture, the operators of the Michael Cusack Centre demonstrated how there would be mutual added value to both the installation and the community-run visitor attraction, the location of which was historically named ‘Poll a Phúca’.”

The judges added: "Michael Cusack Centre demonstrated compatibility to bringing the Púca to its natural home, confirming the interpretative element and story that will be told through the development of an educational aspect to the visitor attraction providing information on the Irish tradition and folklore collection of the Púca."

Dónal Ó hAiniféin, Cathaoirleach of the Board of Michael Cusack Centre, said: “We welcome the decision of the Independent Assessment panel. We are delighted that our bid to host the Púca artwork installation was successful. The Púca will be very welcome to Poll an Phúca in Carron at the Michael Cusack Homestead. Tá áthas an domhain orainn fáilte abhaile go Poll a’ Phúca a chur roimh an píosa ealáine ar leith seo. Táimid cinnte go mbeidh an Púca ar a sháimhín só anseo.”

He added: “We look forward to the installation and the interpretation of the Púca and in creating a new Samhain/Púca Storytelling Festival at the Michael Cusack Centre on November 1st to facilitate a better understanding of the tradition and place of the Púca in Irish Folklore, Heritage and Tradition. An innovative and inclusive programme of community events will be developed to celebrate the Púca for adults and children alike.”

Harte says the new location is fitting for his Púca statue: “The Burren was always a hideout for renegades and outsiders so it’s the perfect haunt for a fairy rogue."

He added: “After last year’s hullabaloo, all Ireland knows the Púca’s troublemaking reputation is well deserved but now at last people can go see The Scare from Clare for themselves.

"Of course, anyone brave enough to rub the Púca’s toe will have seven years’ luck.

"And as for the locals who kindly gave my lovely horse a home, they'll have good luck on tap - hospitality is gold to The Good Folk.”

It is intended that the Púca will be erected at the Michael Cusack Centre in Carron in June.