The heir to the British throne meets with Sinn Féin President Gerry Adams at the location where a British ambassador was killed by the IRA. 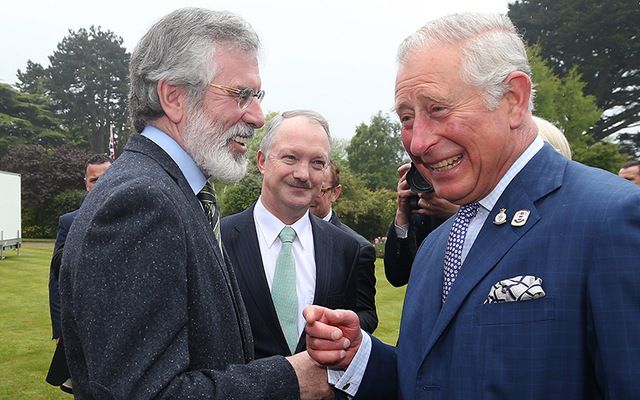 British Prince Charles has visited the graves of Michael Collins and Eamon de Valera as well as a memorial marking the centenary of the 1916 Easter Rising on the final day of his four-day trip to Ireland.

The British royal, accompanied by his wife, the Duchess of Cornwall Camilla Parker Bowles, later met with Sinn Féin’s Gerry Adams at the site where a British ambassador was killed by the IRA in the 1970s.

Shaking hands with Charles at an official function in Glencairn, Adams spoke of the need for reconciliation while Charles offered his commiserations to the Sinn Féin President on the death of his colleague and former Northern Ireland Deputy First Minister Martin McGuinness.

Glencairn was an extremely significant location for the pair to meet at, as the site where a British ambassador and young civil servant were killed by an IRA-planted bomb in 1976.

"The history's the history and it's really, really important, but the future hasn't been written and we need to write the future,” said Adams.

"Particularly in these Brexit days, it needs to be a history that's based upon the best that we can get for all the people on this island."

The British royal couple at the grave of Michael Collins. Image: RollingNews.ie.

Earlier in his trip, Prince Charles also spoke of the importance of reconciliation, calling the Northern Ireland peace process a beacon to the wider world of the ability to achieve peace.

Speaking on Wednesday evening from the Irish President’s home in Áras an Uachtaráin, the British prince emphasized his support for continued good relations between the UK and Ireland.

Although acknowledging the difficulties both countries face, he continued to say "our joint efforts have become a beacon for the rest of the world and I feel it is important to keep bothering you with my visits to demonstrate the United Kingdom's commitment to the peace".

After visits to Kilkenny Castle, where he tried his hand at the Irish sport of hurling, and a trip to the Seamus Heaney Homeplace Center, Prince Charles began his final day with a trip to Glasnevin Cemetery in Dublin where he visited the graves of some of Ireland’s most important and influential rebels and politicians.

As part of a ceremony at a war memorial in Dublin, the royal couple arrived at the Cross of Sacrifice in Glasnevin Cemetery before attending the unveiling of Victoria Cross paving stones in memory of four Irish-born soldiers - Corporal John Cunningham, Company Sergeant Major Robert Hill Hanna, Lieutenant Frederick Maurice Watson Harvey and Private Michael James O'Rourke. The four soldiers were awarded the Victoria Cross in 1917.

Read more: Prince Charles tries his hand at hurling during visit to Ireland

Also in attendance at the event was the Irish Minister for Arts, Heritage and the Gaeltacht Heather Humphreys who laid a wreath at the Cross of Sacrifice within the cemetery.

A short ceremony was also held at the Necrology Wall, a controversial memorial erected on the centenary of the 1916 Easter Rising that bears not only the names of the rebels and Irish citizens who died during the fighting but also the British soldiers and police who lost their lives. Laying wreaths at the wall, a minute’s silence was held followed by a piper’s lament.

This is the third year in a row that Charles has made a May trip to Ireland but the first visit since the Brexit vote in the summer of 2016. He expressed his wishes, however, that the trips would continue and expressed his desire to visit as many of the 32 counties of Ireland as possible during his lifetime.

"I hope and pray that during the rest of my life before I drop dead, I might have the chance to visit as many of the counties as possible in this great country," he said.

He met with Irish Taoiseach Enda Kenny before concluding his trip.