Four Irish Americans became heroes when they rushed to rescue a 5-year-old girl who got into difficult in the water at Dublin's Portmarnock Beach. 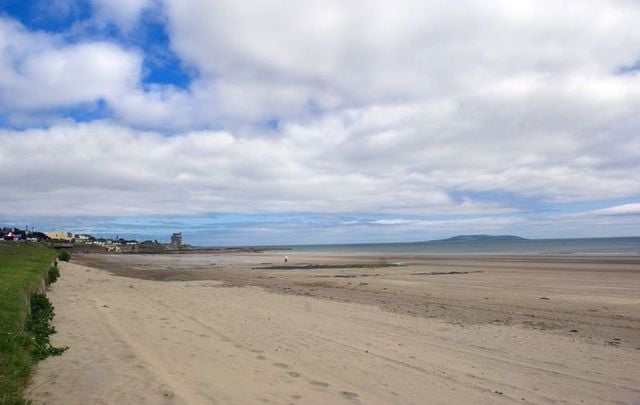 Four Irish American men are being hailed as heroes after they rescued a 5-year-old girl who had been swept out to sea at Dublin's Portmarnock beach on Monday.

The Irish Independent reports that Walter Butler, 21, his twin brothers Eoghan and Declan, both 18, and their brother-in-law Alex Thomson, 24, quickly mounted a rescue mission when they saw that the young girl, who was riding an inflatable raft, had gotten into difficulty.

The four men, who are in Ireland from Virginia in the US for their Irish grandfather’s funeral, had only just entered the water at Dublin’s Portmarnock beach when they saw the 5-year-old on a “pink flamingo floaty screaming for help.”

While the Irish Coast Guard, units from the Howth RNLI, and the Dublin Fire Brigade were all notified and rushed to the scene, the group of Americans took matters into their own hands to save the child.

Multi agency response to #Portmarnock after reports of a child in difficulty. We sent  &  from Kilbarrack/Swords stns. Thanks to @HowthRNLI who took our Advanced Paramedic in their rescue boat to scene & @howthcoastguard who provided 4x4 transport & Rescue 116  #Teamwork pic.twitter.com/6bnUnGNBep

Walter Butler, a health services technician for the United States Coast Guard, told The Independent: "As we swam out I realized that if this girl needed to be revived or needed any medical attention I had to be in my best shape to provide first aid.”

"You could see the brave little girl fighting for her life,” Walter said. He explained to The Irish Mirror that he swam back to shore “so I would be in the best shape if need be because these guys certainly would’ve been tired by then.”

"She was doing everything she could to stay alive. Luckily, she gave it her all and Eoghan had enough time to grab her."

Eoghan said: “There’s not enough words out there to describe the exact moment, but when I saw her in the vastness of the sea struggling to keep her head above water all I could do was to reassure her that people were out there for her and to ask for her to keep strong.”

"When we finally got there she was a nervous wreck. Luckily I was able to take her mind off of the matter by talking to her, asking her when birthday was, what her favorite color was and other things.”

Alex said the incident made him think of his own child who is due to be born this fall: "The main thing I was thinking about was we couldn't lose that little girl. I’m expecting a daughter in October, and was empathizing with the father's fear.”

"I just couldn't imagine the pain he and the family would have felt had she gone under.

"I’m feeling good now. I slept well knowing the girl was safe at home," he added.

The Irish Mirror reports that in a strange coincidence, the men's brave rescue occurred on the anniversary of the drowning of their great-uncle.

The child was treated by paramedics at the scene before being transported to Temple Street Children’s Hospital with non-life-threatening conditions.

The girl’s father, who does not want to be named, told The Irish Mirror: “Only for them, my daughter wouldn’t be here today.” The father said he was screaming for assistance "helplessly" as the situation unfolded.

“They were so brave. They should get an award.”

“My daughter was taken to hospital but she is safe and well at home now. I’d really like to thank those men.”

The Irish Mirror reports that the men and the girl's family are due to meet on Tuesday.