Holy Father will visit homeless shelter in Dublin and Knock Shrine, in Mayo while visiting Ireland for World Meeting of Families but he will not cross the border. 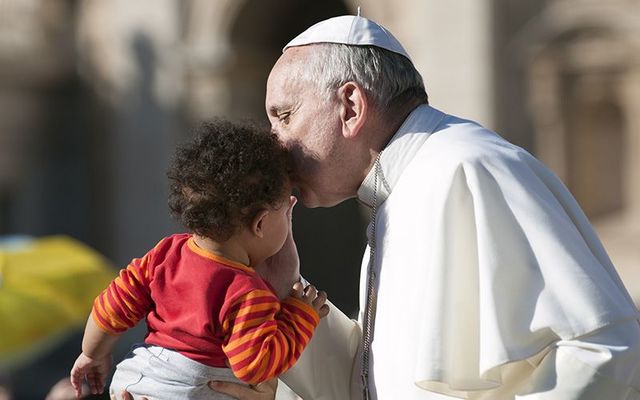 Pope Francis kissing a baby during a public visit. iStock

Holy Father will visit homeless shelter in Dublin and Knock Shrine, in Mayo while visiting Ireland for World Meeting of Families but he will not cross the border.

The Vatican has confirmed Pope Francis’ official itinerary for his visit to Ireland on August 25 and 26 2018. After months of speculation it has been revealed that the Pontiff will visit the Day Centre for Homeless Families of the Capuchin Fathers in South Dublin and the Knock Shrine in County Mayo during his trip to take part in the 9th World Meeting of Families (WMOF). He will not make a trip to Northern Ireland during his stay.

This will be the first Papal visit to Ireland since Pope John Paul II toured the country in 1979 when millions turned out in Dublin and Galway to great the Holy Father.

Although a visit to Armagh was planned when Pope John Paul II arrived in Ireland for his 1979 visit, it was cancelled and the nearest he got to the North was Drogheda due to security concerns. In the lead up to Pope Francis’ 2018 visit the Bishops of Northern Ireland had been campaigning for the Pope to cross the border.

Here is his itinerary in full:

08:15 Departure by plane from Rome/Fiumicino for Dublin

10:45 Transfer to Áras an Uachtaráin (The President’s Residence in Phoenix Park, Dublin)

11:15 Arrival at the Presidential Residence and WELCOME CEREMONY in front of the main entrance of the Residence

12:10 Arrival at Dublin Castle. Meeting with authorities, civil society and diplomatic corps and speech of the Holy Father

15:30 Arrival at St Mary’s Pro-Cathedral visit to the cathedral Greeting of the Holy Father

16:15 Transfer to the Day Centre of the Capuchin Fathers in south Dublin

16:30 Private visit to the Day Centre for Homeless Families of The Capuchin Fathers

19:45 Feast of Families in Croke Park Stadium and speech of the Holy Father.

At the press conference on Monday Archbishop of Tuam, County Galway, Michael Neary confirmed that he had personally invited Pope Francis to visit Ireland. He made the invitation during the Irish bishops’ visit to the Vatican in January 2017.

Neary said “I warmly welcome the announcement this morning of a papal visit to Knock which is a very appropriate link with the World Meeting of Families.

"One of the most beautiful sights at Knock is to see families, sometimes the three generations praying and enjoying the peace and tranquility of the Shrine.

"The Apparition at Knock was a family apparition incorporating Our Lady, Saint Joseph, Jesus as the Lamb of God, and John representing the extended family."

Dublin’s Archbishop Diarmuid Martin said "My hope is that now the World Meeting of Families - the pastoral preparation, the Pastoral Congress in the RDS and the visit of Pope Francis – will open out for families renewed inspiration, hope and healing.

"The visit of Pope Francis must not be just a once off event. It comes as the Church in Ireland struggles to find a new place in Irish society and culture - a very different one from the dominant one it held in the past.

As many as 600,000 people are expected to attend the Pontiff's special mass at Phoenix Park for the WMOF. The event itself will host 200 speakers from all five main continents of the world.

Amoris Laetitia (Joy of Love) will be the guiding theme of WMOF 2018 - with other themes including the future of marriage in the modern world, the impact of technology on the family and the impact of homelessness, addiction, domestic violence and disability on families today.

09:20 Arrival at the Airport in Knock. Immediate transfer to the Shrine

09:45 Arrival and visit to the chapel of Knock Shrine. Angelus on the square in front of the Shrine Angelus of the Holy Father

10:45 Transfer to the airport in Knock

11:10 Arrival at the airport in Knock

11:15 Departure by plane for Dublin

11:50 Arrival at Dublin International Airport and lunch with the Papal Delegation

18:45 Departure by plane for Roma/Ciampino.