The start of Irish American heritage month, has historically been marked with an official proclamation from the President. 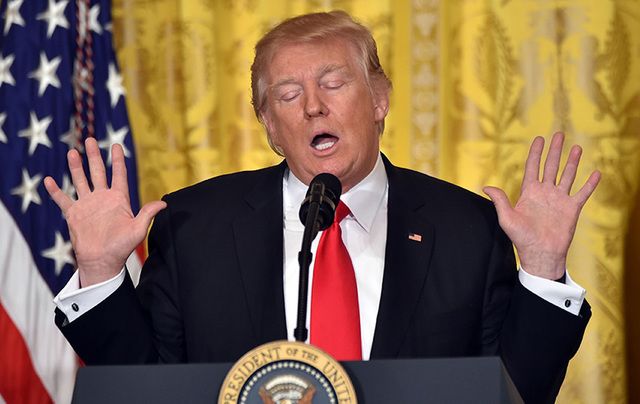 The start of Irish American heritage month, has historically been marked with an official proclamation from the President. Trump hasn't announced it yet.

Scroll down for updates

Today, March 1, marks the start of Irish American Heritage Month, which honors the achievements and contributions of Irish immigrants and their descendants living in the United States.

You wouldn’t think it based on the silence from the White House, however.

The month has historically been launched with an official proclamation from the President, issued on the last day of February, but the Trump White House has yet to make any reference to Irish America Heritage Month.

While there are certainly weightier matters facing the US government, the Proclamation of Irish American heritage month is a cherished tradition for the Irish American community and a seen as testament to the bond between the US and Ireland.

It was first celebrated in 1991, making special the weeks surrounding St. Patrick’s Day, March 17, the most Irish day of the year. Although the feast of the patron Saint of Ireland is officially a Roman Catholic holiday it has become a celebration of all this Irish across the world and especially the United States.

A trip back through the Obama WhiteHouse.gov archives shows years of the official proclamation, which eloquently speaks to the impact the Irish have made on America.

“Centuries after America welcomed the first sons and daughters of the Emerald Isle to our shores, Irish heritage continues to enrich our Nation. This month, we reflect on proud traditions handed down through the generations, and we celebrate the many threads of green woven into the red, white, and blue,” read the 2014 proclamation.

“From ethereal green shores, generations of Irishmen and women set out across an ocean to seek a new life in the New World.  Often without family or funds, these brave souls put their faith in the ideas at the heart of our democracy -- that we make our own destiny, and if we work hard and live responsibly, we can build a better future for our children and grandchildren.  Early immigrants from Ireland shaped our founding documents, and in the decades and centuries since, Irish-American heroes -- like the courageous members of the Fighting 69th -- have fought and died to protect a Government of, by, and for the people,” the 2015 proclamation noted.

“Today, the United States and Ireland enjoy a thriving and cooperative bond buoyed by a strong legacy of exchanges between our peoples. During Irish-American Heritage Month, let us pay tribute to the extraordinary mark Irish Americans have made on our Nation, and let us look forward to continued collaboration, friendship, and partnership between our countries,” the 2016 proclamation concluded, followed by the text that makes it official.

“NOW, THEREFORE, I, BARACK OBAMA, President of the United States of America, by virtue of the authority vested in me by the Constitution and the laws of the United States, do hereby proclaim March 2014 as Irish-American Heritage Month. I call upon all Americans to observe this month with appropriate ceremonies, activities, and programs.”

The Trump administration has previously confirmed that the traditional St. Patrick‘s Day celebration at the White House will go ahead this year, but what about recognizing Irish American Heritage month?

We’re still waiting on that proclamation.

Update: At 5pm on March 1, White House Press Secretary Sean Spicer tweeted that the president had named March 2017 as Irish American Heritage Month. There still does not appear to be a proclamation on the White House website, however.

Some on Twitter took issue with the phrasing of the statement, too, pointing out that Trump was not the one to name it Irish American Heritage Month, which can instead be credited to George H.W. Bush.

Lol at the people reacting to this like its a new thing. Irish-American Heritage Month has been a thing since 91.https://t.co/tB1TjS3B0X

George H.W. Bush created Irish Heritage month in 1991 this administration literally has no idea what has ever happened in the White House