The interior designer in charge of the $1 million project previously redecorated the White House for Jimmy Carter. 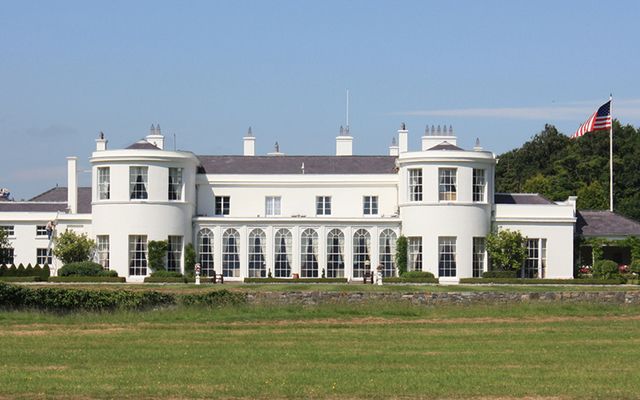 Deerfield, the residence of the US Ambassador to Ireland, located in Dublin's Phoenix Park. Wikimedia Commons

Brian Burns, President Trump’s US ambassador to Ireland-designate, is to redecorate the Dublin home that has housed America’s ambassadors for decades.

Although as yet unconfirmed by the US Senate, the millionaire philanthropist has reached out to staff in Dublin and has committed $1 million to renovating Deerfield House where he and his wife Eileen will live.

In charge of the renovations will be fellow American, Carleton Varney. The interior designer has previously supervised the redecoration of the White House under Jimmy Carter, Dromoland Castle in Co. Clare and Adare Manor in Co. Limerick.

“What we are planning to do is to make it for both ways, for entertaining as well as to give it a very warm, cozy and cared-for look,” he told the Irish Times from his home in Florida.

“It will be a very homely experience while at the same time retaining the tradition of being a ceremonial place as well.”

Varney previously oversaw modifications to the property in 2001 and said, “I think of it all the time because I walk through the rooms.”

The ambassador-designate’s wife, Eileen Burns, is “Not a woman who is afraid of color.” And as such visitors could expect to be greeted by much more striking color schemes than the current ones.

But whatever they decide it will be in keeping with the period charm of the 241-year-old manor house.

“The house is like an old lady, a beautiful woman: you can dress her in the period and in the time but you don’t put her in a mini-skirt or try to set her in another environment,” Verney added.

Deerfield House was previously the home of the Chief Secretary of Ireland, namely the British Government’s minister in charge of Irish affairs and a total of 69 Chief Secretaries lived at the Manor House. Between the age of two and six, a young Winston Churchill lived at Deerfield whilst his grandfather served as Lord Lieutenant of Ireland i.e. the British Monarch’s representative in Ireland. After independence in 1922 it was rented by the United States Government and functioned as the Legation’s office and the head of mission’s home. After Ireland became a republic in 1949 the US upgraded its diplomatic presence in Ireland with the building of a new Embassy in Ballsbridge and Deerfield Park sole function became as the house of the ambassador.

The annual Fourth of July gathering at Deerfield. Photo: RollingNews.ie

The property comprises of 62 acres of land, the ambassador’s residence and three further cottages. US Presidents who have stayed at the house include Kennedy, Nixon and Clinton. Other Presidents who have visited Ireland, namely Obama, Bush Jr and Reagan, stayed elsewhere for security reasons.