Sadly, there’s one glaring error on this $50 MAGA hat. Can you spot it? 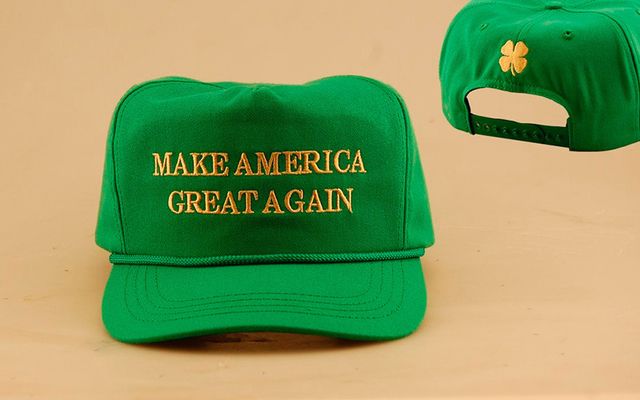 Team Trump have redesigned their iconic red ‘Make America Great Again’ caps just in time for St. Patrick’s Day. The green and gold baseball caps cost $50 and must be ordered before March 13th for guaranteed delivery by the 17th.

However unlike their more famous red version which were made in the China the green caps are said to be “proudly made in the USA”.

And because federal election law means the hats can’t be shipped outside of the US, if you’re living abroad it looks like you’ll have to do without.

But critics were point out that the designer had made a mistake by including a four leaf clover instead of the traditional three leaf variety shamrock St. Patrick used to teach the pagan Irish about the Holy Trinity. Perhaps they are what we would call “alternative shamrocks”.

This gets a FAIL: He put a 4 leaf clover instead of a Shamrock on the hat! https://t.co/HuNAyucfv8

Ireland’s Taoiseach (Prime Minister) Enda Kenny is set to visit the White House on St. Patrick’s Day to present President Trump with the traditional gift of a bowl of shamrocks, perhaps he’ll point out the difference to him? Or perhaps we’ll see Kenny donning some new headwear.