The President-Elect isn’t a fan of Ireland’s planning regulations it would seem, and he’s lost interest in Doonbeg. 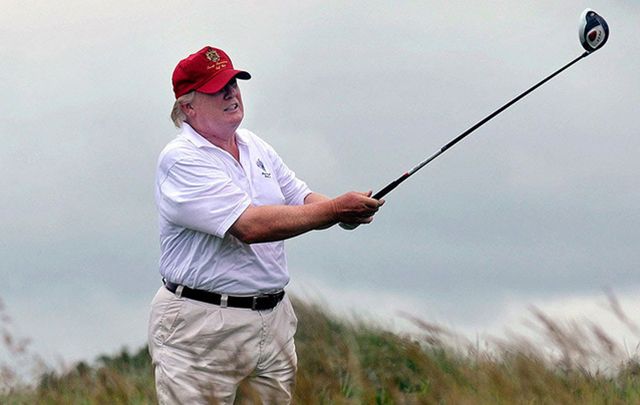 Donald J. Trump playing a round of golf on his course in Doonbeg, Co. Clare. YouTube

President-elect Donald Trump has said he is no longer interested in his golf course in Co. Clare. Trump made the startling revelation during an interview with the Times of London and the German magazine Bild in Trump Tower this weekend.

"I own a big property in Ireland, magnificent property called Doonbeg," he said after the discussion turned to the EU’s notorious bureaucracy.

His comments delighted campaigners in Clare who have attempted to thwart Trump’s attempts to develop the picturesque resort. In a statement on their Facebook page, Save Doughmore – Doonbeg beach, they said, “Seemingly Mr. Trump was upset when we stopped his first plans for a giant wall on our Irish beach, let's make sure we upset him a bit more and stop his latest plan. Objections to be made to Clare County Council before February 3.”

While in December Trump withdrew the application to build a wall spanning over two miles to protect the property from coastal erosion, a second application for a smaller wall was submitted soon after.

Their proposal to the county council states, “Doonbeg Golf Resort proposes to seek, at the soonest, planning permission from Clare County Council to place coastal protection at a number of locations on the seaward edge of the golf course at Doughmore Bay.

“Protection would be afforded to the golf course hole numbers 1, 9 and 18. The works would be wholly within lands owned by the golf course. There would be no material effect upon the adjacent SAC areas.”

Campaigners had pledged to oppose it, too, although John O’Dea of Doonbeg Community Development told the Journal.ie that most of the people against the project in his experience were not from the local area.

The Trump hotel at Doonbeg.

The reference to Doonbeg was the only mention Trump made to Ireland in the hour-long interview. He did, however, make it clear that he was no great fan of the European Union.

Britain leaving the EU “is going to end up as a great thing,” he said, and he predicted that other countries would soon follow.

"Have a golf course/trade deal on my terms – or not at all" says Trump to Gove (in so many words). #Doonbeg #Brexit https://t.co/HW6zx5FEw4

And while he said he had “great respect” for German Chancellor Angela Merkel, he took the highly unusual step of criticizing her domestic policies, insisting that her decision to admit refugees from Syria had been a foolish one.

Ireland’s Foreign Affairs Minister Charlie Flanagan dismissed the interview as "a color piece" and attacked Michael Gove – the Scottish interviewer and prominent Brexit campaigner – as not an "impartial or, indeed, disinterested reporter."