Michelle O'Neill faced criticism after she attended the funeral of veteran IRA member Bobby Storey in Belfast on Tuesday, June 30. 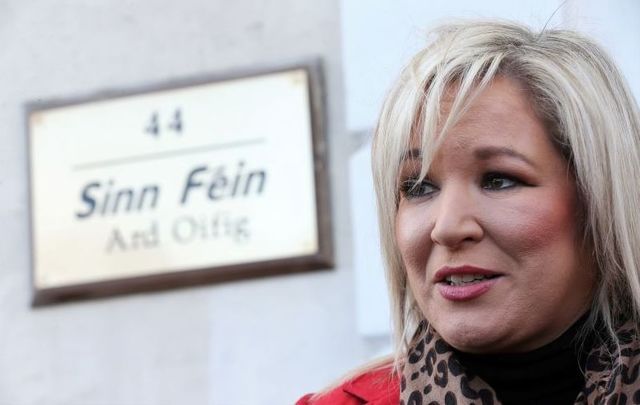 Around 1,800 people lined the streets of Belfast on Tuesday to pay their respects at a time when Northern Ireland's COVID-19 restrictions allow up to 30 people to attend funerals.

Now, Northern Ireland First Minister Arlene Foster has called for O'Neill to stand aside as Deputy First Minister while police in the region investigate alleged social distancing breaches at the funeral.

Foster wrote to O'Neill to ask her to step down while the investigation is carried out, according to reports.

RTÉ News reports that O'Neill will not be standing down or stepping aside from her role as Deputy First Minister during the investigations.

O'Neill has defended her attendance at Tuesday's funeral, claiming that she believed her actions were within the public health guidelines.

DUP MP Jeffrey Donaldson said that O'Neill should "demonstrate respect and integrity" and stand aside during the investigations, claiming that her actions had damaged the message communicated by the Northern Irish Government during the pandemic.

"We're in the middle of a pandemic... the Executive stepped up to the mark, what happened this week damaged and undermined what the Executive has been doing," Donaldson said.

However, Donaldson said that he would not support collapsing the Executive and calling for another election in the middle of a global health crisis and said that Sinn Féin must take responsibility and apologize.

SDLP leader Colum Eastwood told RTÉ that there was a huge amount of public anger being directed towards Sinn Féin at present over the issue.

"She [Michelle O'Neill] communicated the public health message, rightly so, and the public went with it.

"I can tell you the number of people who buried people during the pandemic who were not able to do the normal thing, bury your loved one with your community around you, and they are absolutely furious," he said.