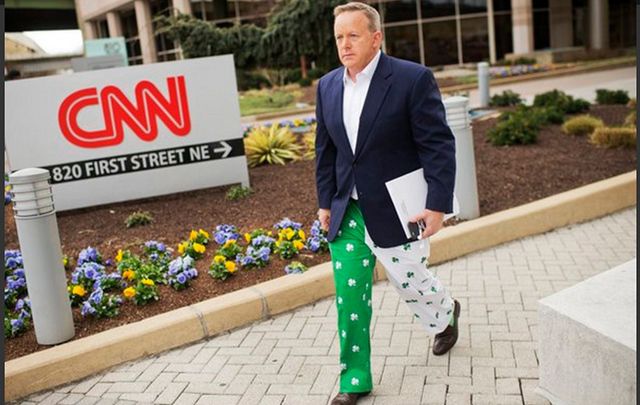 Irish American press secretary to the President Sean Spicer does not believe an overhaul of the US tax system will have a negative impact on Irish business, insisting that increased competition will be good for both the US and for Ireland.

In an interview with the Irish Times, Spicer, whose great-grandfather moved to the US from Kinsale, Co. Kerry, commended Ireland on their economic policies, stating that they set an example he believes the US should follow.

“Ireland, frankly, did a really good job of getting the Celtic Tiger by bringing industry and business over there through smart policy. One of the things that the president talked about during the campaign was we have got to be smarter when it comes to tax and regulatory policy,” Spicer said.

President Trump has suggested that the US corporation tax will be reduced from 35 percent to a rate between 15 and 20 percent, a tax cut which will see it come more in line with the 12 percent corporation tax offered in Ireland.

Within a week of his inauguration, Trump met with business leaders in the White House to discuss his proposals for tax reform and the cut back on regulations, again warning that his “America First” doctrine would ensure that US companies would be heavily taxed if they attempted to relocate elsewhere. In this meeting were two businessmen with operations in Ireland; Michael Dell from Dell Technologies and Alex Gorsky from Johnson & Johnson, who employ several thousand people in Ireland between them.

Spicer downplayed the impact this could potentially have on Ireland, however, stressing that it should not be viewed as a threat to the Irish economy.

Spicer, a former communications director of the Republican national committee, also attempted to downplay the concern for the estimated 50,000 undocumented Irish living and working in the US, suggesting that they were not the main target of Trump’s campaign to crack down on illegal immigration.

“We are going to walk through this in a very systematic, methodical way,” he told the Irish Times, repeating once again that those who have committed crimes or who “are not productive members of society” will be the main focus if Trump carries out his campaign promise to quickly deport between two and three million early in his presidency.

“You got to remember that number one, first and foremost, being in this country is a privilege, not a right, but again I think the president has got a big heart and I think we are going to walk through this in a very systematic way,” he said.

“Our nation has a very robust legal system of immigration … we are a nation of laws and so coming to our country through the proper channels is key. You can’t break the law to come here to live. It just doesn’t make sense.

“So I think, frankly, we are probably among the most lax when it comes to the countries of the developed world in terms of our immigration laws.”

Amidst a busy and controversial first two weeks in his new Press Secretary role, Spicer did appear to relax during one of his earlier press conferences when asked by RTÉ Washington correspondent Caitríona Perry about the traditional invite to the Taoiseach [Irish Prime Minister] to visit the White House on St. Patrick’s Day, Spicer declaring the issue as something that was “near and dear” to him.

An extremely proud Irish American, Spicer is looking forward to March 17, despite the controversy in Ireland surrounding the invite and calls for Taoiseach Enda Kenny to refuse.

“I have been in Washington for twentysomething years and it is a big day. You watch the prime minister come, that lunch that they have on the Hill,” he said.

“I have always seen it from afar and so now it is neat to have what will be a much different seat.”

With many Irish Americans such as chief strategist Steve Bannon, Kelly Anne Conway and national security advisor Mike Flynn, receiving prominent roles in Trump’s White House, Spicer believes it to be because Irish Americans are “attracted to good movements.”

“And the president is leading a solid movement,” he adds.