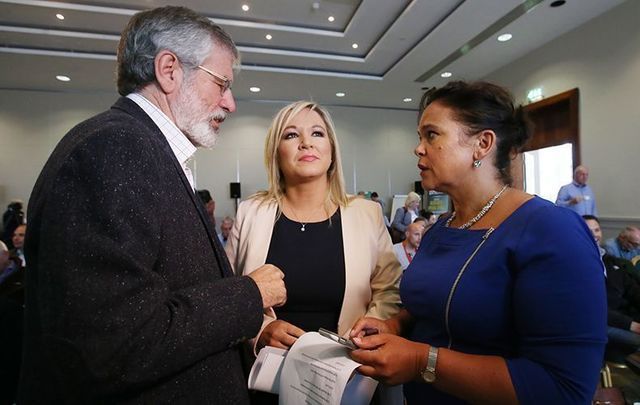 "A new chapter on the road to the republic has begun. We all have a part to play in writing it." - New Sinn Féin President Mary Lou McDonald TD

New Sinn Féin President Mary Lou McDonald has said the party is beginning a new chapter and she was “honored and privileged” to take the position as President of Sinn Fein. She was speaking at a special Sinn Fein convention attended by 2,000 delegates in Dublin.

McDonald, 48, has been a member of the Irish parliament for a Dublin constituency since 2011 and is a Dublin native who represents a changing of the guard.

She paid tribute to her predecessor, Gerry Adams who had served in the job since 1983.

"Gerry Adams, more than anybody else, built Sinn Féin. His leadership has guided our party to its strongest position since partition. He has defined politics on this island for a generation or more," she said.

"Now as a new generation takes the reins of leadership, our job is to bring innovative and modern ways of advancing our politics.

”...we will lead from the front, with determination and courage," she added.
"We are United Irelanders. We want to secure and win a referendum on Irish Unity.

Read More: Tim Pat Coogan: Gerry Adams changed everything but can Sinn Féin succeed without him?

"I want us to achieve this with respect, graciousness and generosity.

"We do not want a 32 county free state. We want a new Ireland, in which rights are guaranteed, cultures respected, and the diversity of our identities embraced," she said.

We are the generation of republicans who will see the rising of the moon with Sinn Féin in government both North and South," she said.

Michelle O'Neill, leader of Sinn Fein in the North was also elected as vice president.