Micheál Martin and Edwin Poots discussed the Northern Ireland Protocol, North-South cooperation, the pandemic, and other issues during the hour-long meeting in Dublin. 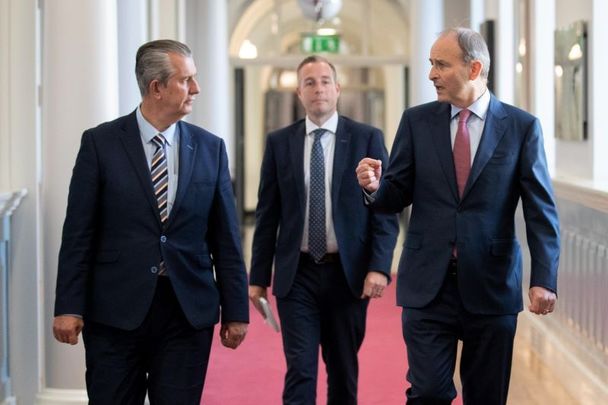 Poots, who has been highly critical of the Irish Government since becoming DUP leader last month, spent more than an hour talking to Martin in what the Taoiseach described as "an open exchange of views across a number of issues".

These issues included the Northern Ireland Protocol, North-South co-operation, and the pandemic.

Martin and Poots agreed to remain in touch over the coming weeks, according to a statement from the Taoiseach.

We shared an open exchange of views on North-South cooperation, the Protocol, COVID-19 and ongoing political developments. pic.twitter.com/9GDbj2AWJo

The DUP leader pledged to attend a North-South Ministerial Council meeting in Dublin on June 18 amid rising tensions in Northern Ireland over DUP non-attendance at cross-border meetings.

DUP MLAs have boycotted several North-South meetings in recent weeks as part of a protest against the Northern Ireland Protocol.

"It would be my intention to lead the DUP team to that meeting. I believe that there are important issues that we need to discuss and deal with," Poots told RTÉ.

"On the basis that there is going to be a serious attempt to assist in dealing with the (Northern Ireland) Protocol I believe that we should be seeking to help normalise relationships once again."

Last month, Poots said that relationships between Ireland and Northern Ireland were "worse than ever".

In an interview with RTÉ's Prime Time on Thursday night, Poots said that he was referring to his time in politics when he said that relationships were worse than ever.

"Since we have had the Belfast (Good Friday) Agreement the relationship has never been as bad and I don't think anyone could argue that is not the case."

Poots said that there was "a lot of anger over the Protocol" and that Coveney and Varadkar "hurt people in Northern Ireland".

However, he said that he respected Micheál Martin and that he hopes to "fix" the relationship which was "damaged" by the last Government.

He said that Coveney and Varadkar were responsible for interruptions to food and medical supplies in Northern Ireland.

Taoiseach Micheál Martin said that he wanted to "reduce friction" between the Irish Government and the DUP.

"Recognising and understanding the genuine concerns in unionist and loyalist communities around the Protocol, the Taoiseach said the focus needs to be on getting issues resolved and on reducing friction where we can," a statement from the office of the Taoiseach said.