Meet the woman behind the pro-Trump movement in Ireland

Sarah Mulligan, an actress and singer from Dublin, is launching a new website for Irish people who love President Donald Trump. 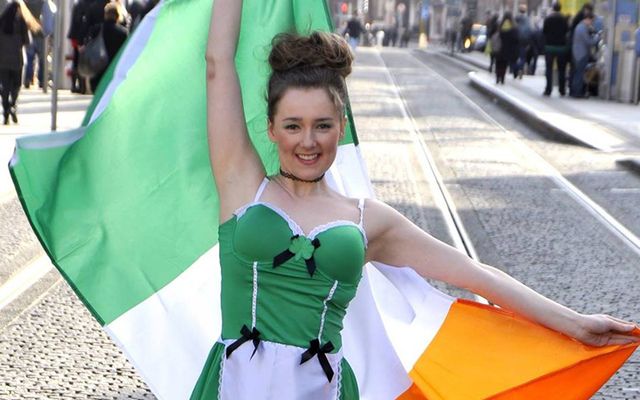 Sarah Mulligan, an actress and singer from Dublin, is launching a new website for Irish people who love President Donald Trump. Sarah Mulligan

Step aside, Tomi Lahren, your Irish counterpart has arrived. While petitions continue to call on Taoiseach Enda Kenny to boycott the White House this St. Patrick’s Day, one Dublin woman is preparing to unveil her own petition, one that will tell Donald Trump all about the support he has in Ireland.

On St. Patrick’s Day 2017, Dublin actress and singer Sarah Mulligan will launch www.irishwholovePresidentTrump.com, a self-funded website with which she intends to inform the Irish people all about the “positive news” regarding the 45th President.

“I love him to bits basically. I do,” the 34-year-old Marilyn Monroe impersonator told IrishCentral.

“People are saying ‘oh, you're doing all of this just to get your profile out there.’ Well, yeah, it is a little bit of self-promotion, but I would love to sing in the White House some day.”

Fed up with the way in which she felt the Irish press was negatively treating the President, the Glasnevin native initially took to Trump's favorite form of communication, Twitter, to tell them so but eventually decided to take matters into her own hands, digging into her savings to fund the site set to be modeled on Fox News.

Writing and presenting content by herself from Dublin, with the help of friends in America who will act as her sources, Mulligan was drawn to Trump during the campaign, insisting that Ireland needs a similar politician and needs to stop following the “herd mentality.”

“I kind of got addicted watching his charisma on screen and then I started reading up about him and I just found his life very fascinating,” Mulligan said.

Mulligan in the US on a J-1 visa. Image: Sarah Mulligan.

“A lot of newspapers and media – RTÉ and TV3 here in Dublin – were constantly saying bad things about Donald Trump and the majority of people wanted to see Hillary Clinton get in. I was just sick and tired of reading the very negative press and I knew what I was reading in the Irish media was all lies.

“A lot of people are afraid to say they’re Donald Trump supporters. They're terrified,” she insisted, outlining her aim to start a petition on her website – that will feature beside a live stream from the Fox News Channel – that will call on Irish people to be honest about their support for the new US President.

“I just think the world of media has gone crazy since he's gotten in,” Mulligan claimed.

The actress’ reasons for supporting Trump are mainly economic, she claims, citing his interest in entrepreneurship, an interest she shares, as one of the main reasons why she could get behind him. Despite his altering opinions on abortion, it was also Trump’s current pro-life stance that won her over, although a dislike for Hillary Clinton also played a big part.

“I didn't like to think Hillary Clinton would get in because of all the stuff that went on with Monica Lewinsky. I didn't want to see all of that dirty sex scandal break out again. I think both the Irish and the American public have had their tummies filled with that. We want people in there [the White House] who are going to run the country,” she stated.

When posed with the evidence of Trump’s own sex scandal in Pussygate, however, Mulligan defends the President, stating she was not offended by his “Jack The Lad” comments.

“He wasn't the President of US when that happened and the press were trying to get any type of dirt on him,” she said. “They're going to do it to me in time because my star is really rising now in Dublin because of what I'm doing and I'm aware of that.

“I wasn't offended by the pussy comments. It didn't offend me in any way, shape, or form.”

Mulligan doesn’t believe that Trump should send home any Irish currently living undocumented in the US. She is hoping to move to Florida herself one day, hopefully when her website kicks off. She has previously spent spent three summers in the US. Calling it “inhumane” for the undocumented Irish to be deported, the fault will lie with the coverage given to Trump by the Irish media, she believes, if it were to happen.

“I do believe that if the politicians and the Irish media keep going the way they're going and spreading their malicious lies and untrue stories, Donald Trump will take one look … and he's going to say keep those Irish out,” she argued.

She does, however, support his Executive Order on immigration and the concept of building a wall along the Mexican border, claiming that Trump has a lot of “sympathy and empathy” for immigrants and is only trying to protect his country.

Mulligan believes Ireland is stuck in the “Stone Ages” and she is eager to escape. Mulligan says she has been bullied throughout her life due, she believes, to the jealousy of other people in the country and a desire to not see anybody do well for themselves.

Mulligan has been interviewed by several Irish radio stations and the Dublin woman has already received a number of negative. She was forced to send a letter to the President of her university about several fellow students.

“They don't even care about politics. They're just trying to take a personal aim at me, so that's kind of worrying,” she stated.

“I will admit that what I wore in that Radio Nova interview was extremely revealing and provocative but I did that on purpose, just to kind of get people talking about my body parts, because that's how you drum up traffic as well. There was a madness to my methods.”

This isn’t a tactic she plans to take forward, however, shifting focus to what she hopes will be a more serious and conservative site.

“This place is killing me slowly,” Mulligan says of Ireland.

“I just don't belong here. My spirit does not belong in Ireland ... America saved my life.

“I think in America you can kind of be yourself but in Ireland, people are constantly trying to suppress you and keep you down and tell you to shut up and silence you.

“I'm kind of retaliating against that now. My confidence was so strong and all of a sudden I'm out the door with interviews and people are loving it because they're like ‘Wow, where the hell did you get all the strength?’ but I got all the strength from America because American people admire my beauty and my talent.

“I feel alive in America and I feel dead in Ireland and that's the only way I can describe it,” she continued.

“Donald Trump will know of my existence because it's going to make him happy that he has followers in Ireland.”

Do you think there is silent support for President Trump in Ireland? Are you an Irish person that supports him? Let us know in the comments section, below.