President of Ireland Michael D. Higgins officially appointed Varadkar as Taoiseach on Saturday after the Dáil voted in favor of his election by 87 votes to 62 earlier in the day. 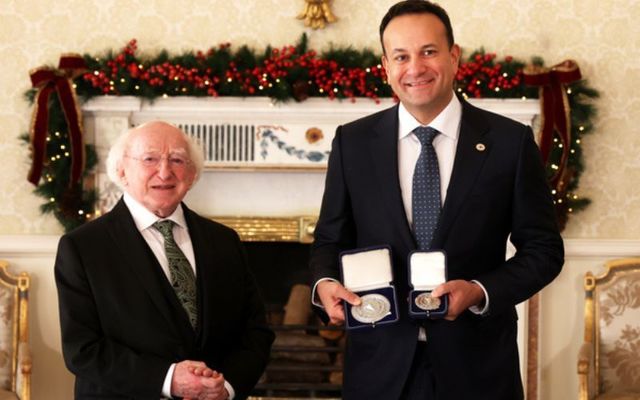 President Michael D. Higgins presents Leo Varadkar with the seals of office in Áras an Uachtaráin on Saturday. Rolling News

Leo Varadkar has been appointed Taoiseach for the second time after swapping posts with Fianna Fáil's Micheál Martin on Saturday.

President of Ireland Michael D. Higgins officially appointed Varadkar as Taoiseach on Saturday after the Dáil voted in favor of his election by 87 votes to 62 earlier in the day.

Varadkar will lead Ireland's coalition government for the remaining two years of its term, while Martin will take over from Varadkar as Tánaiste.

Martin resigned as Taoiseach on Saturday morning as part of the coalition deal agreed upon between Fianna Fáil and Fine Gael following the 2020 general election.

Varadkar, 43, served as Taoiseach in the previous government between 2017 ad 2020 and told a special sitting of the Dáil on Saturday that he was "honored and privileged to have the opportunity to serve again.

"And I look forward to getting down to the hard work in the next few hours," Varadkar said after receiving the official seals of office on Saturday.

He also commended Martin on the "leadership he has shown as Taoiseach", stating that he provided "reassurance and hope during difficult times".

"In 2020 the new Taoiseach was unable to have his wife and family with him in the Convention Centre as he received the greatest honor of his life. That, too, was leadership. I am glad they are here today," Varadkar said.

"During the pandemic, we saw the best of each other, and it meant that the new coalition was born in a spirit of togetherness and hope."

Varadkar said his priorities would be to provide hope, housing, and economic opportunities to everyone in Ireland during his two years as Taoiseach.

Speaking during the Dáil special sitting, Martin said it was the "honor of a lifetime" to serve as Taoiseach for the last two years.

"It is both a privilege and a responsibility to serve as head of government in a free and democratic republic," Martin said.

"I have been deeply conscious of this every day I have held the office of taoiseach. I have sought always to work on behalf of all the Irish people and not just those who support my party and our colleagues in Government."

Martin, who was accompanied by his wife while he tendered his resignation at Áras an Uachtaráin on Saturday morning, received a standing ovation from the majority of TDs at Saturday's special sitting.

Sinn Féin President Mary Lou McDonald, who voted against Varadkar's appointment as Taoiseach, criticized the coalition government's record over the past two-and-a-half years and said Martin's resignation should have triggered a general election.

"We should now have a general election because we need a change of government," McDonald said.

The Sinn Féin President also disagreed with Martin's claim that the coalition government is delivering on its promises.

Varadkar's takeover as Taoiseach has also triggered a cabinet reshuffle, with Martin taking over as Minister for Foreign Affairs in addition to becoming Tánaiste. Martin will also take over as head of the Department of Defence.

Simon Coveney, who served as Foreign Affairs Minister while Martin was Taoiseach, will take over as Minister for Enterprise, Trade, and Employment, a role previously held by Varadkar.

Current Minister for Health Stephen Donnelly will retain his role following the cabinet reshuffle, while Darragh O'Brien will continue to serve as Housing Minister after surviving a vote of no confidence last week.