In one of his first moves since taking over as Prime Minister just hours ago, Boris Johnson has fired NI Secretary of State Karen Bradley. 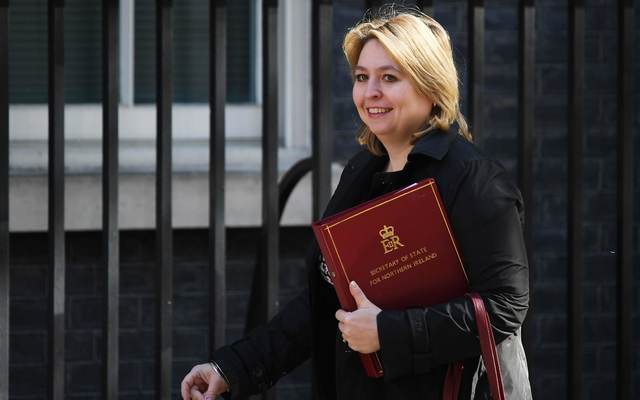 In one of his first moves since taking over as Prime Minister just hours ago, Boris Johnson has fired NI Secretary of State Karen Bradley.

The Secretary of State for Northern Ireland, Karen Bradley MP, has been fired by new Prime Minister Boris Johnson.

Taking over the position in January 2018, a year into the current Stormont stalemate that sees Northern Ireland without a devolved government, Bradley has faced much criticism over her 19 months in the role.

In a statement read after her firing, Bradley said that it had been her "an enormous privilege to... represent this special nation and integral part of our precious union.

"I personally regret that I will not conclude the current talks process."

You can read a full interview with Karen Bradley on her time in Northern Ireland here.

Karen Bradley out. Her period as Northern Secretary marked by a series of blunders that endeared her to no party. Both Sinn Féin and the DUP will be united in welcoming her departure.

While there have been many talks attempting to restore Stormont during her tenure as NI Secretary of State, none have been successful, leaving Northern Ireland without a government for over two and a half years.

She has faced calls to resign on several occasions, amid fierce criticism of her knowledge of Northern Ireland and its politics. The MP previously admitted that she was unaware that the unionist community would not vote for a nationalist party and vice versa.

Calls for her resignation only heightened in March 2019 over comments she made regarding The Troubles and killings committed by British services, stating that the murders were "not crimes."

Bradley later explained that she said "the wrong thing."

"I know how raw that pain is and I'm devastated to think that I have made it worse," she said, following backlash from the families of those killed by British services during this time.

Although there are lots of people in Northern Ireland who are concerned about the future under Boris Johnson, his decision to sack Karen Bradley will be universally welcomed. It is rare to achieve such widespread cross-community consensus on anything in Northern Ireland. pic.twitter.com/ziZmJxW0bv

Bradley also remained loyal to former British PM and Conservative leader Theresa May,  leading many to believe that Johnson would replace her once he came into power.

Speaking to IrishCentral two weeks ago about May's involvement in Northern Ireland, Bradley backed the work of outgoing PM, claiming that the current situation was different from previous eras when British Prime Ministers could be more involved in Northern Ireland.

"I have to be in parliament to vote, my predecessors didn't have to be quite so much, because of the way the parliamentary arithmetic worked," she explained.

"I think also you were facing different issues and a different situation. What we're facing today is the need for the politicians that were elected locally to do what the people who elected them want them to do and come together.

Karen Bradley says she is "extremely proud of our achievements over the past 18 months" adding "I personally regret that I will not conclude the current talks process but I am honoured to have led the process over the past 12 weeks".

"It's about how you get people into a place where they feel they have got enough balance in a deal, that they can do a deal.

"There is nowhere else in the world where you expect politicians who are diametrically opposed on just about every issue to come together and form a government together," she later added.

You can read the full interview with Karen Bradley on her time in Northern Ireland here.

Do you think firing Karen Bradley was the right move? Let us know your thoughts in the comments section, below.