Arizona Republican Senator and his lifetime of public service reflects everything great about America. 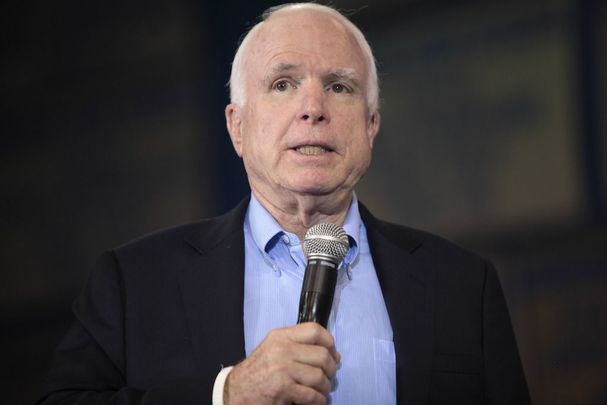 Arizona Republican Senator and his lifetime of public service reflects everything great about America.

Arizona Republican Senator John McCain has announced his retirement after over 30 years in politics and 23 years in service with the United States Navy.

McCain, who has long been a support of the Irish efforts in lobbying for immigration reform, was diagnosed with terminal brain cancer after a blood clot procedure revealed a malignant tumor.

After a   life of public service, McCain reflects everything great about America. In his upcoming book "The Restless Wave " McCain said his decision to retire would liberate him to speak his mind about the current American political climate.

McCain is a bona fide hero and a proud Scots Irishman who loves his roots. He was the first Republican to show an interest in the Irish Lobby for Immigration Reform at presidential campaign level appearing at an Irish presidential forum in 2008, in Scranton.

He is also a war hero – the wounds that he suffered during the Vietnam War, having being captured and then tortured in the notorious Hanoi Hilton were beyond savagery and cruelty – it was downright sadistic. He refuses to discuss it. He came through it like a hero and has been one ever since.

Last year the Senator told 60 Minutes the five years he spent as a prisoner of enemy combatants seemed like as an eternity that can never be reclaimed. McCain, however, McCain also seemed grateful for his time in prison.

Through his 81 years he’s known the humiliation of capture, personal love and loss, riches, fame and condemnation in his nine decades and, in his view, that was a pretty good hand to be dealt.

McCain followed in his father and grandfather’s footsteps become entering the United States Navy. They had both been Admirals.

McCain graduated from the United States Naval Academy in 1958. He trained as a naval aviator and flew attack aircrafts from carriers.

In 1967 McCain narrowly escaped death during the Vietnam War Forrestal fire. In October of that years, on his 23rd bombing mission, McCain was shot down over Hanoi and badly injured.

He was then placed in a prisoner of war camp. In 1968, the next year, he was offered an early release, by the North Vietnamese, as it would mean leaving his fellow prisoners behind. He was release in 1973 after the Paris Peace Accords.

When he returned from the Vietnam War he studied at the National War College. He retired from the Navy in 1981 as a captain. He then moved to Arizona where he started his political career.

Thank you for you service John McCain.

Read more: John and Cindy McCain's Irish roots: What you need to know