Irish national broadcaster receives over 200 complaints about a map of Ireland excluding the six counties of Northern Ireland. 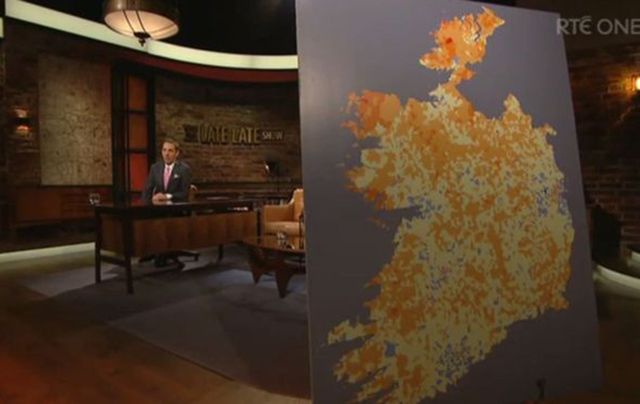 A map of Ireland featured on RTÉ's Late Late Show blacked out the six counties of Northern Ireland. RTÉ

Irish national broadcaster RTÉ has received formal complaints from the public after using a map of the island of Ireland in which Northern Ireland was blacked out. The broadcaster has been accused of "free statism and rank partitionism" for using the map with the six counties missing on popular Friday night talk show The Late Late Show.

The Irish National Caucus condemned to decision by RTÉ, referring to the images as a “Taliban-like desecration of Ireland’s map.”

“Just as this Fermanagh man has stopped using the term “Free State,” out of respect for the Irish peace-process and Good Friday Agreement, RTÉ (“Ireland's National Television and Radio Broadcaster”) goes and commits the ultimate act of Free State-ism. Even Cromwell did not try to make a part of Ireland disappear.”

I see, according to RTE's cartographic infelicity, that we who live in Donegal now need a boat to cross the border pic.twitter.com/YSgDcZLsOi

The broadcaster confirmed that over 200 complaints had been lodged officially by the public while defending the use of the image as the topic being discussed referred only to statistics from the Republic of Ireland. The map in question was shown as part of a segment on a documentary investigating the links between location and mortality. Dr. Eva Ormond appeared on the long-running chat show to speak about the greater risk of cancer for people who live in deprived areas of the country.

“A total of 203 complaints have been received in relation to the data map used on The Late Late Show segment on Ireland’s Health Divide on Friday night,” a spokesman for RTÉ said.

Nationalists in Northern Ireland, however, have slammed the map, drawing attention to the many famous Irish people who came from Northern Ireland who they claim had been whitewashed over.

Sinn Féin’s deputy leader Mary Lou McDonald led the charge, asking what RTÉ was doing in showing such a map.

“What is this? What is this all about? Who in RTÉ took it upon themselves to mutilate the map of Ireland. And why?” she asked.

Others have criticized her jump to chastise RTÉ, however, without giving context to the interview or referencing the appalling figures that show Ireland’s poorest areas to be at a greater risk of cancer.

“In case any of ye are interested in what was going on there, it was a survey of effects on general health and’ life expectancy depending on where you live in the Republic of Ireland referencing, healthcare, education, deprived areas, etc, since the six counties aren’t funded by the Irish Government that’s probably why they weren’t included,” wrote one commenter.

“But fair play to Mary Lou, she put up a pic with no real statement about it and still got ye all going … again.”

What do you make of RTÉ’s map? Let us know your thoughts in the comments section, below.