Negotiations between TDs from each of the parties lasted until about 4 a.m on Saturday night in an attempt to resolve several outstanding issues before finalizing a deal. 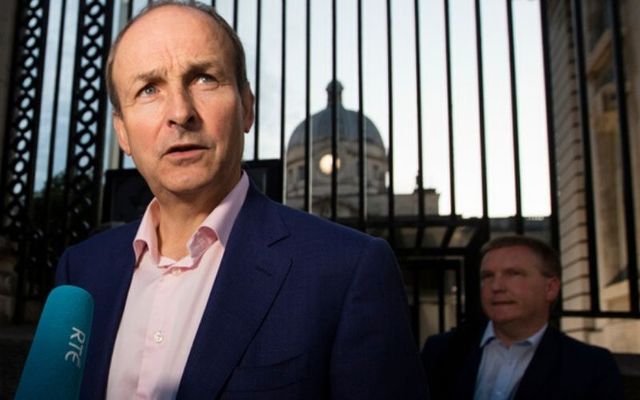 Michéal Martin arrives at government buildings with his team to finalize a deal on a coalition government. Rolling News

The leaders of Fine Gael, Fianna Fáil, and the Green Party are meeting again on Monday to formally sign a draft deal for government, more than four months after February's general election.

Fine Gael leader Leo Varadkar, Fianna Fáil leader Michéal Martin, and Green Party Leader Eamon Ryan met on Sunday afternoon to conclude the deal but talks are set to carry over to Monday due to some unresolved issues.

The deal for government will be sent to members of each party to vote on once the leaders finalize the deal.

Negotiations between TDs from each of the parties lasted until about 4 a.m. on Saturday night in an attempt to resolve several outstanding issues before finalizing a draft deal.

The three parties have been negotiating a document for government for almost a month and a half and the lengthy document includes several significant changes to transportation and environmental policy, including increased funding for public transport and cycling infrastructure.

There will also be extra funding for third-level education, a ban on gas exploration in Irish seas, and a commitment to build 50,000 social housing units over the next five years.

The document also includes plans to set up a United Ireland division within the Department of the Taoiseach.

Fianna Fáil TDs additionally believe that Michéal Martin will be the first leader of the new government, with power likely rotated between him and Leo Varadkar throughout the five-year term.

The three leaders are still locked in tense negotiations over certain issues, including potential tax cuts during the next five years, lowering the pension age, and introducing an Occupied Territories Bill which would ban imports from Israeli settlements located in Palestinian territory.

They are expected to resolve those issues today.

Tanáiste Simon Coveney, who is deputy leader of Fine Gael, said on Sunday that the deal is "good for the country."

He said that he was confident that the party leaders would be able to sell the draft document to their party members and the wider public.

Minister for Health Simon Harris, meanwhile, appeared on RTÉ's This Week in Politics on Sunday morning and said that he expects the leaders to finalize a deal on Sunday, but that "there's some serious talking to be done".

"It’s been a long 127 days since the general election, so I think it’s getting to a point now where we need to get on with it. I think the public want and need a government," Harris said.

.@SimonHarrisTD says he is hopeful that the party leaders will finalise the agreement today. He says @FineGael have a number of key issues that they want contained in the programme for government. #rtepolitics #rtetwip pic.twitter.com/OSb3AQPyeW

Fianna Fáil TD Barry Cowen told RTÉ that he expected a deal to be done on Sunday, while Green Party TD Marc Ó Cathasaigh also told RTÉ that the negotiators were happy that they had finished their work.

"Today was a long day, a difficult day, and it required people on all sides to dig deep and work together to find resolutions," he said.

Taoiseach Leo Varadkar said on Friday that he believes the new coalition government could be in place by the end of June or by early July.